The Photograph Springs Alive on TSN 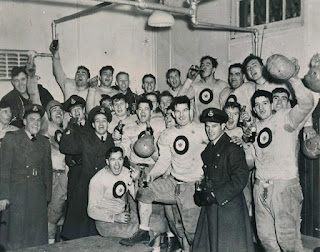 The lot of a TV critic is not a happy one.
I spend my evenings in the dark relentlessly searching for something passable on my flickering TV set.
And then something as evocative as The Photograph comes along. Surely it's one of the best Remembrance Day specials I have seen in a while.
And, yes, it is on TSN. What a great surprise.
The Photograph plays like an old time movie --at its core is a great, involved mystery concerning Jake Gaudaur.
Now I thought I knew all about  Gaudaur because I spent the first decade of my writing career at The Hamilton Spectator.
And Gaudaur and Hamilton were intertwined --he helped the Tiger Cats win two Grey Cups and he managed the team to four more historic wins.
And after that he went on to serve 16 years --a record --as commissioner of the Canadian Football League.
I remember spotting him at several football games, white haired and beneficent, a fine reminder of all the glories of the CFL. And it was big news everywhere when he passed in 2007.
That was the public man. In private his two daughters say he was taciturn, loathe to discuss the past. His generation did not display emotions. But for decades Gaudaur carried this aching void within himself.
And it all goes back to a specific photograph --a locker room snap from 1942 showing the winning Royal Canadian Air Force Hurricanes who won the Grey Cup 8 to 5 over the Winnipeg Bombers.
The Photograph is all about the odyssey of Gaudaur's two daughters Jackie and Diane to find out why Gaudaur kept that picture for so long but refused to ever discuss it or even to identify his fellow players.
What emerges is a splendid portrait of a generation willing to put their lives on the line for their beliefs
We follow these guys through basic training at the Canadian National Exhibition  barns in 1941 and into advanced training as pilots.
Over 1130,000 young men trained as pilots to fight in Europe and in rare archival footage we see them put through their paces. They seem so incredibly young, boys still, and so very upbeat and joyous --they never understood the terrible fate that awaited so many of them.
And after the Grey Cup Victory on Dec. 5, 1942, the gang slowly disbanded. In the particular photograph of 27 a total of 15 were sent to Europe.
And eight never made it back home.
One of those was Jake's best friend, American expat Ed Poscavage who even married a Toronto girl but eventually chose to fly with the U.S. air force. A relative plays a radio interview with Poscavage done weeks before he died in action.
The Gaudaur women get important tips from their mom, Molly, still sprightly at 89 --she's able to fill in some of the blanks of the story as are relatives of some of the other fliers.
At the heart of this story masterfully directed by Manfred Becker (The Fatherland) for Infield Fly Productions there's this incredible sense of loss and of young lives snuffed out before the boys ever really lived.
Gaudaur did not go to Europe with his mates --he was ordered to remain behind to train more pilots. And certainly in some sense he suffered from survivor loss. He never got that chance to fight and it haunted him forever.
His daughters have made The Photograph spring alive as a salute to a generation of airmen who never returned. They are remembered 70 years on still as young and exhuberant as they appear in that one particular photograph.
THE PHOTOGRAPH PREMIERES ON ENGRAVED ON A NATION FRIDAY NOVEMBER 9 AT 7:30 P.M. ON TSN.
MY RTATING: ****.