The Norse: An Arctic Mystery Is Must-See TV 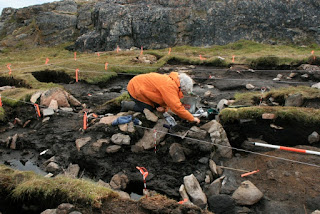 The Norse: An Arctic Mystery is so well made you'll watch it no matter what.
But it has also become the lynch pin in an astonishing example of government interference --more on that later.
The images are everything with The Norse.
We are on a desolate cape of treeless Baffin Island where famed northern archeologist Pat Sutherland is searching and sifting through the remains of perhaps the earliest known example of European settlement in North America.
Forget what your history high school teachers told you about Christopher Columbus discovering the continent.
After three decades of toiling away Sutherland has really hit a rich lode of history --examples of the first known permanent Norse settlement in Canada.
Centuries before Columbus the Norse were trading with the native Dorset people as Sutherland has discovered --there is evidence of metal possibly from knives being sharpened.
And in one key but bizarre find she discovers evidence of rat remains --imported from Norse ships because the rats were not native to the area.
And the scope of the settlement which had a stone foundation and the presence of many rooms and seems entirely Norse like in its construction techniques.
This exciting new documentary from Toronto's 90th Parallel Productions was directed, produced and written by Andrew Gregg (We Will Remember Them) whose work I've been following for some time.
It's constructed like a jigsaw puzzle, opening up the world of the Norse whose geographical world knowledge extended from the Black Sea all the way over to Greenland and an neighboring island they called Helluland (today's Baffin Island).
We go with Sutherland from the Baffin site to the Outer Hebrides. In Denmark we're shown the replica of the kind of ship the Norse used to hop and skip across the northern Atlantic from the Faroes to Iceland and then Greenland.
Baffin Island is clearly designated on their maps although they were hardly enthusiastic about sharing their find with potential rivals.
From the Dorset people the Norse would have wanted furs and ivory (from walruses) and metals.
And all this is unraveled in an exquisite hour that is one of the best NOT I've seen in years.
The kicker comes not in this actual hour but in news reports Sutherland was subsequently dismissed from her post after spending the last 13 years on her Helluland project. She was dismissed by the Canadian Museum of Civilization after three decades of outstanding research and world class recognition for her discoveries.
Sutherland is continuing to fight her dismissal which comes after two other northern archeologists were also dismissed.
Politics is suspected as the museum undergoes a name change. As part of the Conservative government's political agenda work on the Dorsets --who preceded the current Inuit --is being discontinued --a startling example of how politics and science must never be allowed to intermingle.
Knowing all this and one watches The Norse in a different light --as an incredible historical find rich in imagery. Sutherland's own research has been dismantled, some of it packed off to other museums.
And if that isn't enough there's also a salutary article in November issue of National Geographic.
THE NORSE PREMIERES ON CBC-TV's THE NATURE OF THINGS THURSDAY NOVEMBER 22 AT 8 P.M.
MY RATING: ****.