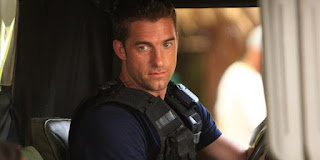 What happened to the 2012 TV season. The  much hyped new shows are fast expiring.
ABC has just announced plans to yank two of its most expensive and ambitious new series.
The network says it will axe both Last Resort and 666 Park Avenue after they have concluded their 13 week runs.
For 666 it's a simple case of ratings fading by the week. A healthy lead in from the hit Revenge turned sour and viewers have been bailing out by the week.
My ABC sources say 666's fate was known inside the network for weeks.
But the decision to also kill off Last Resort  (starring Toronto's Scott Speedman) is a shocker since it got pretty positive reviews.
ABC says it may well revive either or both shows for the next season.
Yeah, right. The web made the same promise with Pan Am and whatever happened to that one?
ABC can afford to cancel these two because it has a large inventory of midseason replacements including Red Window and Zero Hour.
CBS has also announced it was canceling its dog awful new series Partners which was a bad step backwards. There were a few laughs but I squirmed every time I tuned in.
It's strange that ABC gave a full order to struggling Nashville which averages 9.4 million viewers a month while dumping Last resort which averaged 9.2 million. I'm only including the 18 to 49 category because ABC is not interested in older viewers.
By contrast 666 Park avenue was down to 6.7 million viewers a week on one of the most watched nights of the week.
One veteran executive I recently talked to said there are now so many competing cable channels that viewers can no longer be counted on to sample all the new TV fare starting up in the fall. Hence midseason launches seem to becoming the new normal.
For many viewers the new seasons simply means new episodes of returning favorites.
Two other series have already departed: NBC's Animal Practice and CBS's Made In Jersey.