Surviving The Grey Cup: A Guide 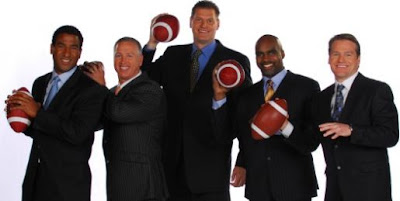 So the other day as I was addressing a Grade 8 class on the future of TV (I don't think it has one) a pert and sassy 13-year old asked me how I survived adolescence in the old world of a 10 channel universe.
I thought it was a funny line and tossed back an equally funny retort.
But now I'm thinking about it because The grey Cup is on Sunday night at 7 on TSN.
It doesn't carry the buzz it used to have.
Not on CBC. Not on CTV.
In ye olden days there'd always be a tussle about which of the nation wide networks would show The Game.
CBS always got there first with big bags of dough --remember this was before Quebecor started asking all those pesky questions about The Corp's finances.
One year I even remember CTV and CBC shared the broadcast so no one would be left out --in those days CTV's coverage was significantly less than CBC's
But these days?
The Game is live on TSN and that's that. The CRTC assumes everybody gets TSN these days but little do they know a lot of people are switching back to antennas these days. They're simply fed up with the huge cable fees and the lousy service.
I think the sports casters covering it will do just fine.
But to misquote my old U of T Chaucer professor Marshall McLuhan, the medium really is the message.
And being relegated to TSN, well, it somehow diminishes The Game.
The same thing happened when Glenn Beck was kicked off Fox TV and wound up on some obscure service and nobody ever quotes Glenn Beck anymore.
Same thing happened to Conan O'Brien in the States as he jumped from NBC to a service (TN) few Americans bother to subscribe too.
Conan no longer is getting the A list stars.
Well, we don't have a 10-channel choice anymore, do we?
The cable universe is 959 cable weblets and counting.
There's VHS and DVD to tape the game for future reference. Yo can tape The Game for later.
A guy I was just talking to told me he has 2,000 hours of curling on TV in his video library. And oh how he loves to watch those classic plays in slow motion.
Instead of Grey Cup CBC has three hours devoted to a movie blockbuster: The Chronicles Of Narnia.
Many households have more than one TV set these days so the days of the entire family gathered around watching CFL football is long gone.
Sunday night CTV is wall-to-wall Americana:Once Upon A Time, the Amazing Race and the 2004 flick The Bourne Supremacy.
Global TV continues its unabashed love affair with American imports: the Simpsons, The Cleveland Show, Alleb Gregory, Family Guy and American Dad.
And so it goes. I could pick Sister Wives on TLC. Naw. Or episodes of Suits and Castle on Bravo! Nope!
Buffalo's PBS affiliate WNED has a two-hour salute to the Lennon Sisters. If it were running a new Mystery! or Masterpiece Theater this is where I'd stop.
Also, there's Animal Planet which carries the repeat of the 2011 Puppy Bowl followed by the special When Animals Adopt at 8. Very tempting, very tempting.
There's a House Hunters marathon running on HGTV. But I'm more tempted by The Walking Dead marathon on AMC.
Turner Classic Movies has its premiere of Marilyn Monroe in There's No Business Like Show Business--Ethel Merman and Marilyn Monroe together again for the first (and last) time.
A baker's dozen of familiar American movie titles also dot the landscape.
And now I'm thinking how did I ever survive in that constipated old 10-channel world.
How did I spend my time?
Than it dawned on me --I actually read a lot of books and magazines back then.
And there was a ton of homework in high school --the government since my day abolished Grade 13 which is the reason record numbers of kids flunk out of university these days.
I made it through the rain OK. I survived on less.
And now with so many chances I just can't make my mind up at all.
Out of sheer frustration I just may watch an old tape or a preview DVD of something I want to review later on.
Posted by james bawden at 10:57 PM

I agree. I went to the '88 Grey Cup in Ottawa. Same two teams, fantastic game. Warm weather +16c. 55,000 fans at Landsdowne. Alas, now that TSN has it and I am on antenna, due to the rip of prices of Bell. I choose to read instead.

I'm 26 and I don't have Cable or satellite and you know what most of the time I think I'm better off for it. But not having the Greycup? CBC was the first broadcaster, it was the full Canadian package, canadian tv and canadian football and it was sometimes played during canadian snowfall. Now it's on an american network and all I can do is follow blogs. Well that's Bullshit. I want the game! signed a disillusioned canadian kid.

What the Hell? CBC Doesn't have the grey cup game on this year. I think that says a lot about where this Canadian
owned corp. is heading. I personally don't have TSN. I love the CFL, but I guess I am a lost cause. Oh well maybe I will get a large pay increase and be able to buy TSN. I guess the CBC, the channel I already own will have to be canceled and TSN added.
Thanks for reading.

Regards,
The Fly On The Wall