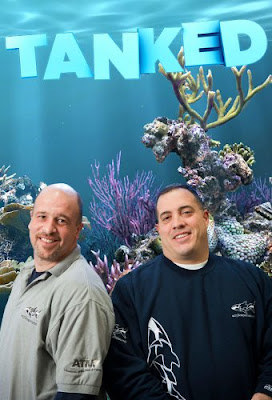 I've really got to stop ranting about moronic reality shows. My solution: just don't watch them.
But then I got a DVD preview screener of another new reality show and it seemed so odd I just had to check it out.
It's called Tanked and is all about a family owned aquarium business set smack dab in Las Vegas where water is at a premium.
I mean I do know a guy up the street and he actually says he likes watching the Aquarium Channel. So there are all sorts of TV viewers out there.
And we've head reality shows about a family who own a funeral parlor, American and Canadian pickers, you name it.
And finding out some of the stuff about the aquarium trade is pretty interesting.
Wade King and Brett Raymer are profiled --King is married to Raymer's sister Heather who also works in the emporium.
They build all sorts of tanks to specifications and the weird orders don't seem to faze them: in one episode a phone booth gets transformed into a tank, one Vegas casino wants a gigantic tank with a mob theme. Go figure.
In all these reality things there are deadlines to meet to keep us watching. And the participants get endlessly interviewed about the tensions they must surmount before the finish. There's the clash of egos. And the owners can get testy sand demand revisions. It's the same when buying a coffin or buying a tank.
When I talked to Wade on the phone he agreed getting used to the cameras and mikes in his face took some adjusting. That's because he's the dedicated, determined worker while Brett plays the lovable goofball role.
"But we've been doing it a long time (14 years) and we have really surmounted a lot of obstacles. I just have to learn to talk more."
An aquarium business set in the sand dunes of Vegas? It seems, well, strange. But maybe it's the perfect place because these people have a visceral need for some water in their lives even if its only in a tank.
"We cater to all people,"Wade is saying. "Yes, the huge projects are interesting. But we have a lot of average customers, too."
And the boys hope someday to come up to Toronto. But when I mention the near freezing temperatures I'm sure I can hear Wade's teeth c;attering. He says maybe later.
After all there's been this bizarre proposal to turn the CBC's gigantic white elephant of a building into the world's biggest aquarium. Now that would be a project of all projects.
Of course the wonderful world of aquariums has all changed with the substitution of acrylic for glass which can scratch a bit.
One website says Wade's most expensive project was a tank that held 3,000 gallons and cost $150,000 because it needed a strong foundation. I should have asked him about that one.
But in the episode I saw there was some weird construction going one. One rich dame wanted a huge tank stuck inside a car. The car was tripped to the frame and painted and a custom built tank set up complete with a painted backdrop.
In another sequence a very rich couple had a series of tanks built on top of each other to fit into the recesses of a living room wall. These custom builds had to be made twice before they were satisfied.
And both of these good ole boys had to don wet suits to dress up a huge casino tank so that the dancing girls could prance underwater with the fish looking on.
We also get some pointers on how the fish have to be quarantined for 30 days before being introduced together in a new tank. Wade is very insistent on providing the necessities so the fish thrive.
Alrady a hit on U.S. TV, Tanked is the latest Vegas business to get its very own series.
TANKED PREMIERES ON ANIMAL PLANET ON MOND. NOV. 7 AT 8 P.M.
MY RATING: ***.
Posted by james bawden at 11:52 PM