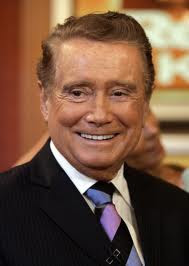 It was an event of cataclysmic proportions.
Regis Philbin is the latest TV giant to depart from daytime.
Losing Oprah was a heavy enough blow. But Regis? He's been doing TV forever.
When did I first interview Regis Francis Xavier Philbin I'm wondering.
I had to look it up --it was on a 1975 TV junket in Los Angeles that I interviewed him for an NBC game show called The Neighbors which was a clone of the Newleywed Game.
Even then Regis had quite a history dating back to his years as announcer on Joey Bishop's late night show (1967-69).
Another gig of that time was as co-host with Cindy Garvey of the daily local show A.M. Los Angeles (1978-81).
I'd watch him in my L.A. hotel room and it was there that Philbin perfected his excited delivery style --he had to because he had to writers giving him material.
In July 1985 Philbin joined with Kathy Lee Gifford in New York on the daily national talk show Live With Regis And Kathie Lee --it ran nationwide on ABC stations and in Canada on CTV.
I spent a day on the set in the early 1990s. I sat up in the bleachers with all those darling women who'd been bussed in from small hamlets on the East Coast. Kathie Lee came out during the warmup and went right up to me and said "You don't look like you're having fun."
Later after the telecast I went to her dressing room and she was beside herself with laughter. "I must have known you were a critic!" she hollered.
Regis was nice, too, but preoccupied with catching a limo that would take him to a book signing on Long Islands.
They worked very well together and the whole effort was unscripted --that's what really made it work.
Kathie Lee decamped in 2000 and siap star Kelly Ripa was chosen as replacement in 2001.'In 2004 Regis overtook Hugh Downs as TV's most watched ever host with 15,662 hours to his credit --and counting.
The Guinness Book Of records said in 2009 he was up to 16,334 hours.
Philbin's contract with ABC was worth $21 million a year. When it expired the network declined to renew on such lush terms because of his age --he's 80.
So he now joins Larry King as a TV star emeritus. Kelly will go it alone with some guest hosts until a replacement is announced.
And Regis's departure has given way to a lot of musing about the future of daytime TV.
I'd say he's irreplaceable.
Look, nobody has stepped forward to replace Oprah. Anderson Cooper seems diminished as a daily talk show gabber. I don't dig Dr. Phil at all. Nate Berkin is pleasant but preoccupied with decor.
The point is made that at her peak Oprah attracted 6,5 million U.S. viewers daily. Drs Phil and Oz get just half that as does Ellen.
Waiting to jump in is perky Katie Couric while CBS is planning one with Jeff Probst.
Soaps are being dumped left and right for cost but talk shows are oh so very cheap.
Because of his background Regis was one of a kind.
And I for one am going to miss his professional pep and sassiness delivered at such an early hour.
Posted by james bawden at 3:14 PM