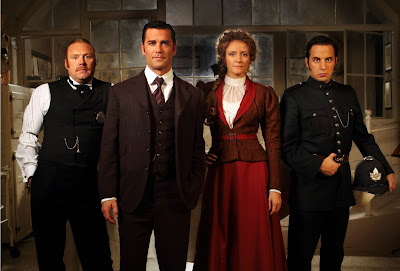 Murdoch Mysteries has been saved from the Citytv gulllotine at the last minute.
It's so unCanadian.
If you want all the details click on Bill Brioux's always excellent TV blog TV Feeds My Family for his insider details.
Murdoch and I we go way back, all the way to the time the concept was a handful of TV movies starring -=-are you ready for it --Peter Outerbridge.
But Outerbridge was a busy guy in those days.
In the summers he'd toil on the Murdochs which were then being shot in Winnipeg for three outings in 2004.
His main job was as star of ReGenesis, yet another classy show produced by Christina Jennings.
I remember at one Global TV launch when asked which one he'd chose over the other Outerbridge chose Murdoch Mysteries which really gave Global's executives gas pains.
But of course when Murdoch segued into a weekly series shooting at the same time as ReGenesis Outerbridge had no choice whatsoever. He had to stick with the sci fi hit.
Enter Yannick Bisson who was available.
I've been covering him since he was the new guy opposite Megan Follows in the TV movie Hockey Night (1984) when he was just 15 and already a comer.
Unlike most teen beau hunks Bisson did not falter --I covered him when he was c-starring in the 1986 flick Toby McTeague, the 1988 TV series Learning The Ropes, High Tide (1994), Nothing Too Good For A Cowboy (1999), Soul Food (2000), Sue Thomas F.B. Eyye (2002).
The word in the Canadian TV industry is Bisson always delivers.
So far the 52 episodes shot of Murdoch have been his steadies work.
I remember being on the set when the series was being shot in Toronto's east end and interviewing the author ()()()() who weeks later almost drowned off the coast of Florida in a freak accident.
The CBC press release says the network will be picking up Murdoch for a sixth season and I'm wondering if that includes rights to the reruns --with these CBC could kill off Ghost Whisperer, right?
CBC picking up another network's series? In CBC's Golden Age it never happened.
I remember dining with Brian Linehan after he defected from Citytv in 1989 --he supposed either CBC or CTV would pick him up but it never happened.
Linehan was part of the competition and not CBC's style, I was told.
I'm also remembering the stink when the new Ontario network Global TV filed for bankruptcy in 1972.
A lot of good Global product had to be dumped because neither CBC nor CTV wanted to acknowledge a need for product from a competitor.
Bernie Braden told me he'd tried to shop his Global consumer affairs show to CBC and got laughed at.
Anybody out there remember the great stink when CBC dumped Don Messer's Jubilee in 1969?
A determined Messer jumped to CHCH to tape another season which was syndicated station to station.
I can't remember a single CTV Canadian show ever going to CBC, can you?
I mean why would CBC ever have a need for Thrill Of A Lifetime, Stars On Ice, or Police Surgeon?
Wait, I'm on a roll! Wouldn't it have been hysterical if CBC had snatched away from CHC either Ein Prosit or The Hilarious House Of Frightenstein? No way!
But when CBC cancelled Fighting Words with Nathan Cohen, the Toronto Star critic sauntered down to CHCH to keep taping episodes until his death in 1971.
No, CBC and CTV would fight over American imports but never over Canadian content. CTV raised hell when CBC snatched away Laugh In for its second season by doubling what CTV was paying for the show.
And years later CBC smatched up thirtysomething after Global thought it had made the purchase for Canadian rights.So CBC riding to the rescue rto save Murdoch Mysteries is good news.
It's too bad CBC didn't also save Godiva's a few season ago, now there was a youth oriented series with great potential.
Perhaps as retaliation Citytv might pounce on Being Erica?
It's just a thought but worth exploring.
Posted by james bawden at 8:40 PM

SCTV, with its drunken Floyd newscaster, and Red Green moved across from Global to CBC.
My favourite network shifted 'almost Canadian' show was filmed in B.C. Smallville. From Global (season 1) to CityTV to CTVtwo to SunTV to CHCH; plus dual carriage on Space and concurrent reruns on Corus's YTV.

I almost forgot: whatever was the deal with those CBC/CTV split announced Grey Cups?

I love Murdoch Mysteries and hope it has a long run. It is a good detective show and has wonderful characters show up in the series. Love the little surprises that always show up during a show. The casting is fantastic. Keep up the good work!