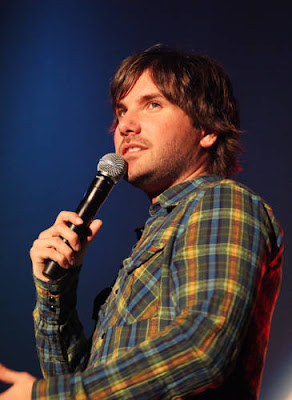 Poor Jon Lajoie, there he was in Los Angeles in co-starring in a bright new TV sitcom The League.
Only trouble was his friends back in Quebec couldn't get the channel FX until last month it suddenly appeared on Canadian cable TV systems.
"But when I'm out on the road with my act Canadians everywhere come up and say how much they're enjoying me in The League."
Either a lot of cagey folk out in the sticks have illegal satellite dishes or they're on the Internet and can watch Lajoie's saucy song parodies.
When told kids on my street were singing one of them Lajoie is momentarily silent. I guess he's hoping it's not one of the salacious ones like Mel Gibson's Love Story.
"We try to be naughty, not dirty," he then explains. "And of course very funny. But these are not for children."
Lajoie talked to me from Toronto (by phone) as he's about to embark on another road trip to parts of Canada rarely traversed."It keeps me sharp and I use the experience to hone my routines and stories. There's nothing like a live audience."
Which mkes being funny on the League especially challenging as it's photographed in real homes outside L.A.'s core.
"We have to figure out in advance what will work. The only audience really? Ourselves I guess."
Lajoie was born in St. Hubert, Quebec but raised in Montreal. His father is French Canadian, mother English hence his total bilingual ability to be funny in both official languages.
When I tell him how much I liked him in the Radio Canada drama L'auberge du chien noir as a character fantasically named Thomas Edison he thanks me but says it was tough to leave the hit series which is still running strong in the ratings.
"I played a bad father who deserts my child. So maybe if the series ever winds up I guess I'll come back to Montreal and finish it. But I had to follow my comedy expectations."
Every actor comes to L.A. armed with a DVD of best scenes. The fact Lajoie's was in French made some L.A. agents hesitant.
"I took meetings, I think that's the term. I met over 100 people." Quebec actors don't exactly flock to L.A. although a few headed by Genevieve Bujold have done well.
"And Cirque du Soleil." Yes, but they don't really perform in English.
On The League Lajoie plays perpetual stoner Taco MacArthur who blames his condition on the fact he was introduced to marijuana at age 8.
"I've written songs specifically for him to do on the show. I can only report all the guys on the show get along and we try to support each other. My character makes a lot of ringtones, that's the best way to describe him. But I'm the only Canadian in the group."
Filming finished for the year on Nov. 3 and now it's time to travel.
"I like to meet the people. Different areas of Canada have different senses of humor. It's always challenging."
NOTE: THE LEAGUE RUNS THURSDAYS AT 10:30 P.M. ON FX CANADA.
Posted by james bawden at 12:06 AM