Smart TV: Rise Of The Machines 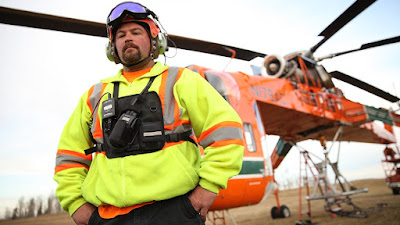 "I wasn't so sure this series could ever be made," chuckles executive producer Carlo Massarella who helped create the gigantic Rise Of The Machines.
Part One of this seven part hour series revs up on Discovery Monday June 22 at 7 p.m.
That's right --while other networks go to sleep for the summer with reruns Discovery is premiering one of its most ambitious and I should say costly sTV shows of the year.
"We wanted to show how trulyt gigantic machines are changing the way mega projects around the world are being created and designed," he says on the phone from London, England.
"I mean it's one thing to envisage one hour but it's quite another to have crews ready to film these enormous projects.
"And we didn't want viewers to simply become overwhelmed by it all so we very carefully place the emphasis in each hour on the human factor --the veterans who have seen and done it all and calmly react to crisis after crisis."
The result is frequently enthralling television.
In the first episode "Mega Lift Ship" we see a 50,000 newly designed ship the Dockwise My Treasure which is longer than two football fields and packs the combined power of 80 Hummers.
The assignment of the talented crew: to deliver a 13,000 ton oil rig from Singapore where it has been carefully constructed to the ultimate destination  half way around the world in the Gulf of Mexico.
And all along there's a TV crew documenting every twist and turn --the first challenge involves getting the massive ship through traffic congested Singapore harbor and it's like threading a gigantic needle --one mishap and the multimillion dollar enterprise would collapse.
"We all had to take out additional insurance," jokes  Massarella.
If the ship actually sank so would the series I'm guessing.
What makes the voyage extra exciting for viewers is the marvelous CVGI animation that deconstructs the innards of the ship --showing how it can be actually lowered in the water to take on the steel giant and how the huge ocean waves can be countered without sinking the ship.
"It was a scary voyage for all concerned," B reports. "Nothing had to be added --those waves are huge, there were times of peril, see how we lasted."
The second week (June 29) there's a look at "Mega Truck" taller than a two-story building--the Liebherr T284 has the pulling power of a freight train.
The third week (July 13) it's "Super Train", the Italo AGV which speeds along at 300 km/hr and is 200 meters long.
The fourth week salutes the "Super Airship", the Aeros Dragon Dream and its first test flight--it can transport cargo around the world at a fraction of the normal cost of airfreight.
The fifth episode "Mega Digger" is about  the Komatsu OC8000 is twelve meters tall and weighs more than two jumbo jets.
The sixth episode I also got to preview-- --"Mega Lift Helicopter" --Canada's Erickson Air Crane sports 11 meter blades and can lift loads of over nine tons.
This episode snaps and crackles with tension --one false move by the trained pilot and the gigantic transmission tower would fall to earth.
And yet these guys must carefully place 120 of them across 120 kilometers in only eight days.
All of this is done by profiling the guys who are used to such challenges --they must also deal with unpredictable wind storms and they realize the margin for any error is very tiny indeed.
Massarella says "Obviously the scope means many networks have to be involved from the beginning., The shooting all must be laid out before we start because time is so precious.
"It's an unique series. We focus on the human factor, that personalizes these extraordinary feats.
"It's a co-production between London's Windfall Films and Montreal's Handel Productions. Really, that's the only way to go.
And he praises the superb CGI effects which let us see inside the ship's complicated shell or peer into the helicopter's motor to view all the components. "That's from Montreal's Digital Dimensions and is tops."
Despite several hairy moments Massarella says the film crew is up for more episodes for a second season. "I'm already making a list of subjects."
RISE OF THE MACHINES PREMIERES ON DISCOVERY MONDAY JUNE 22 AT 7 P.M.
MY RATING: ****.