Why CTV Is Too Successful To Make Big Changes 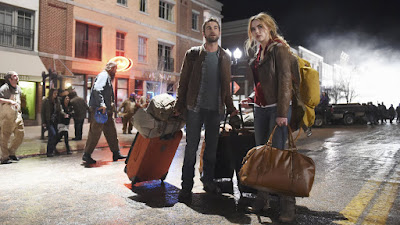 That was quite a shindig Bell Media put on at the Sony Center which was overflowing with thousands of giddy media advertising buyers.
And why shouldn't CTV give itself a big party I ask you.
The network is very dominant in its old line network CTV and has invested wisely in its rapidly growing specialty weblets including Discovery, Animal Planet, HGTV, Showcase.
But an ominous air of complacency stalks the CTV executive corridors.
Many of the pickups of very long running shows attract what demographers term "oldsters" --viewers over 55 who repeatedly give the U.S. ratings crown to CBS.
The challenge at CTV is to start refreshing the brand before it wilts away --but that would mean spurning American hits still in the Top 20.
Among the aging dependables returning to CTV: Blue Bloods, Criminal Minds, Castle, Grey's Anatomy.
The only sitcoms I see are Big Bang Theory and The Goldsbergs.
CTV TWO has even more of these staples: Law & Order: SVU, The Voice, Vampire Diaries, plus the sitcoms Mike & Molly and Hot In Cleveland.
For now CTV can babble on about nabbing last year 6 of the Top 10 new U.S. shows: The Flash, Gotham, Marvel's Agent Carter, The Odd Coup[l;e, How To Get Away with Murder.
But only Shonda Rhimes's How To Get Away With Murder has truly emerges as a ratings blockbuster.
And there's another problem: CTV is supposed to have 50 per cent Canadian content in its prime time schedule but I can only spot the excellent made-in-Toronto scripted series Saving Hope series in its fall lineup and these run Saturday nights in reruns against NHL hockey so good luck.
CTV's Fall 2015 new U.S. picks include Quantico starring Priyanka Chopra as part of a diverse new group of FBI recruits at Quantico Base --but she is also suspected of masterminding the biggest attack on New York city since 9/11.
I'm not sure this type of material should count as "entertainment".
Then there's Blindspot starring Sullivan Stapleton as a crack FBI agent investigating the strange case of a heavily tattooed woman who is found naked in Times Square.
Code Black stars respected veteran Marcia Gay Harden as she trains the next batch of ER doctors --and of course there are shocking secrets of her past.
Then there's the Dallas style Blood & Oil with Chace Crawford (Gossip Girl)  back on TV and the comeback of Don Johnson in a Big Daddy turn as a ruthless tycoon.
Mid-season debuts are scheduled for DC's Legends Of Tomorrow from the creators of The Flash and Arrow with such characters as The Atom, White Canary and Hawkgirl.
Lucifer stars the fallen angel himself in the person of Tom Ellis (Rush) plus there's Lauren German as a dedicated LAPD detective and D.B. Woodside as God's emissary, the angel Amenadiel.
And aslso there's The Catch, yet another series from Shonda Rhimes  starring Mireille Enos (The Killing) as a fraud investigator who becomes the victim of a massive fraud herself.
CTV TWO pickups include the new variety show Best Time With Neil Patrick Harris ands a pickup for Season 3 of Sleepy Hollow.
In spectacular fashion CTV rolled out dozens of American stars as per usual plus some Canadian ones as well.
But there were verbal fire works when CTV tried to maintain its sports network TSN is still number one --this after Rogers bought rights to all NHL games --and Bell also owns the Blue Jays giving it a hammer lock on baseball as well.
In news here's where I say I'm sorry. I didn't think Lisa Laflamme could maintain Lloyd Robertson's ratings when she took over.
But she has quietly and effectively made the news at 11 p.m. her own and ratings are still tops.
I chatted up some of the advertising girls and boys who seemed in complete agreement that Bell is the best buy in town over many platforms.
The most impressive statistic in the Bell arsenal: it has 17 hours of simulcast --more than any other network.
But that is at the expense of developing a Canadian identity.
And the old ways may not work forever as computer kids can think of any number of ways to vault that electronic fence and directly watch American networks.