"Excuse me, old chap, mind if I sit beside you?"
Did I mind!
The speaker was the great British actor Patrick Macnee--yes, that's right John Steed of TV's Avengers.
And the occasion was a lavish 1989 NBC dinner for the premiere of the TV version of Around The World In 80 Days.
Macnee died June 26, aged 93, at his home in Rancho Mirage, California.
Stars Pierce Brosnan, Peter Ustinov, Sir John Mills, Simon Ward and others were in attendance at the grand ballroom of the Universal Hilton hotel (in Los Angeles).
Macnee whisked in late and took the vacant seat next to me and we chatted for hours about his illustrious career.
Turns out I'd only just caught him in Toronto on the stage with a remount of Sleuth opposite Geraint Wyn Davies--it ran to packed housesat the Century playhouse for months.
"We cleaned up on that one," Macnee chuckled. "I mean a two character play and not an empty seat. We all made plenty off of it."
But Macnee had an even closer connection with Canada.
Turns out he was part of a "Britpack" of distinguished British talents (including director David Greene and Barry Morse) called on to set up CBC TV drama way back in 1952 serving as producer on some live TV productions but also as star actor.
"Did a Hamlet there I was particularly proud of. The studio was an old Pierce Arrow car showroom, you could hear traffic on the street. All live. Very terrifying. But it worked, it really worked."
But, of course, that was way before The Avengers which ran on British TV from 1961 to 1969.
Macnee's depiction of debonair Steed made him a household word.
"They offered me the part and I said no way. I'd seen real killing in World War II and so I refused to carry a gun at all.
"They swooned when I said 'Why don't I instead carry an umbrella?' That and my bowler hat made TV audiences sit up."
But Macnee said what made the trendy spy show an instant hit was "Girl power, first Honor Blackman, then Diana Rigg. But when Linda Thorson took over it was, well, uncomfortable." 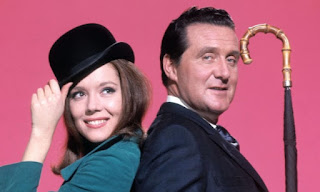 A revival in the Seventies was "Ill conceived. Didn't work. Look, I love Joanna Lumley but the times were out of joint. Why did I do it then? Money, dear chap, money.'"
Macnee contended that treating the women as vigorous and physical beings "marked a blow for equality --they could fight their way out of danger as well as I could."
Born in London in 1922, Macnee attended Eton College and the Webber Douglas Academy of Dramatic Art before long service in the Royal Navy during World War II.
A childhood classmate was Christoper Lee "who was scary even back then."
"I did all sorts of iddly diddly small roles before Steed made me a star at the age of 39.
"I left my first wife and two small children to work in Canada where I learned the rudiments of acting.
"I wasn't the nicest of persons back then. I'm nicer now.
"I had to wait for stardom which is why I appreciate it so much."
Films include a bit in Laurence Olivier's Hamlet (1948), the 1951 version of A Christmas Carol and Roger Moore's last outing as James Bond A View To A Kill(1985) and This Is Spinal Tap.
When I asked Macnee why his Steed was so popular he quickly said "He was a gentleman but not posh. He was never a sexist-- unlike James Bond. I simply think people trusted him."
That description might also sum up Macnee's characteristics. "Except I took U.S. citizenship in 1959, old boy. I could never stand that British climate don't you know? I may dress in Saviole Row but acting on Love Boat and Hart To Hart pay the bills."