X Company is CBC's new World War II drama that probably seems even better than it is.
That's because of the sheer lack of competition: the conventional Canadian networks simply will not make anything they cannot sell to the U.S. market
Witness the cruel fate of Global's Combat Hospital --one dazzling summer run followed by a cancellation after ABC pulled the plug in the U.S.
Of course I expected X Company to be greatly entertaining fare.
After all it was created by Mark Ellis and Stephanie Morgenstern who created the CTV hit Flashpoint.
But now it's time to look at the last episode of this season and it's a crackling good one all about the Nazi move to exterminate the Jews in war torn France.
The germ of the concept is all true: there really was an X Camp on the shores of Lake Ontario that trained saboteurs to be dropped behind the Nazi lines In Europe.
Canadian, American and British soldiers trained here and were then parachuted into France.
The drama is shot in Hungary which doubles nicely for France --indeed all the architecture seems of another era.
British actor Jack Laskey has emerged as the undoubted star of the series playing Alfred Gates, shy, inward but with a capacity to remember everything about any document he ever reads.
His is an actual condition termed synesthesia.
Hugh Dillon is frequently seen back at the camp trying to rein in his unctuous British superior.
Mean while out in the towns of France these five Allied spies are trying to create a form of mayhem --to startle the Nazis, disrupt production lines, facilitate contact with the French Resistance and all in preparation for D0-Day..
The depiction of the attitude of the French under Nazi subjugation is finely etched. For many collaboration was the only way to survive.
But there are other suyoprises: in the last new episode one Fascist supporter turns out to be an Irish
In this story there are strong females particularly Evelyne Brochu (Delphine on Orphan Black) as Aurora, a true leader of the pack girl whose brother was killed by the British during the troubles --she has jumped onto the German side because she says the Germans plan to give Ireland freedom at the end of the war.
Also outstanding is Lara Jean Chorostecki as X Camp's officer Krystina Breeland.
Of course we've watched World War II heroics before in U.S. and British TV series.
But it's as if Canada's role was b ing deliberately minimized if not plain overlooked.
X Camp redresses the balance and it's so well made you'll want another season which comes up next fall.
The finale clearly sets up where the story is going and is chock full of good old fashioned chases, terse gunfights and the unresolved fate of at least one of our heroes.
X COMPANY'S SEASON FINALE IS ON CBC-TV WEDNESDAY APRIL 8 AT 9 P.M.
MY RATING: ***1/2. 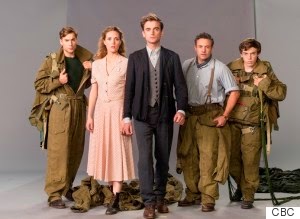 I have not watched enough of X-Company yet to truly decide if I like this show; certainly, as much as a WWI/WWII 'junkie' as I think I am, the premise and the initial marketing efforts intrigued me, it certainly looked appealing-- however, CBC dealt my experience of enjoying this series an unexpected shock when, in announcing that X Company would be 'returning' for a second season, it seemed to me that they bundled it in under the umbrella marketing slogan, "All your favourite CBC shows are coming back..." I barely got a chance to watch one episode of X Company, then I hear this show is "coming back" and it is a "favourite" of mine-- and yet, Strange Empire, which I truly enjoyed and really really really wanted to watch its second season, it gets cancelled! So, in retaliation, I end up NOT watching X Company. Fingers crossed there will be a DVD release and I can watch this excellent sounding show at my convenience-- meanwhile, I'm still silently praying to the Canadian TV Gods to make a second season of Strange Empire!

This show sucks, cancel it now! Bad acting and even worse writing. The show is choppy with no fluidic story line....the action scenes are poorly written and performed, by the end you will cheer for the Germans to kill the x company and put you out of your misery.