Game Of Thrones Back For Fifth Season 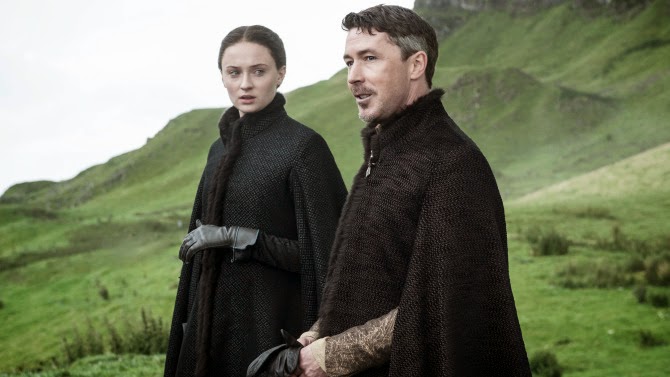 Until a few months back I'd never seen a single episode of Games Of Thrones.
There. I've said it.
To me the HBO drama was merely another cable show I promised myself I'd one day sit down and watch.
Well, I have yet to play complete catch up but already I'm hooked and just in time for the fifth season which debuts on HBO Sunday night at 9.
With preview DVDs to help me I'm now madly trying to assimilate all that happens in the first new four hours.
Trouble is the TV creators have almost run out of material from novelist George R.R. Martin --his sixth installment has met with repeated delays meaning show runners  David Benioff and D.B. Weiss must go it alone and risk the fury of all those TV Thrones junkies everywhere.
Says one TV critic (Joshua Alston) :"Their tweaks could make Thrones a far better show than they could have produced through slavish devotion to the source material."
To me the story seems bloodier and more ruthless than ever before.
As I watched away I was aware this is the future of TV --far removed from the constraints of aging networks preoccupied with their procedural crime thrillers.
In the new episodes I was particularly taken with the acting of Aidan Gillen and Stephen Dillane.
The odd couple relationship of Tyrion (Peter Dinklage) and bodyguard Bronn (Jerome Flynn) continue to delight.
The one missing star is Bran (Isaac Hempstead-Wright) who is in a cave being tutored by the Three-Eyed Raven.
This season seems the bloodiest so far but also the most thoughtful if that seems possible.

I can understand friends telling me they've ditched network TV for what cable these days is offering.
That's why Game Of Thrones is HBO's most popular ever series.