Why There Are Few Canadian Sitcoms


So here I am watching the preview DVDs of two hit HBO sitcoms.
Both Veep and Silicon Valley are returning with news seasons Sunday night although you'd never know it because the focus is relentlessly on the return of Game Of Thrones.
Both these half hour comedies are sheer fun to watch.
Both are made for a nickel and a dime with what money there is going to the writers and actors.
Veep, of course, is the bigger hit after three glorious past seasons but I'm not giving much away by saying Veep is now misstated.
At first it was a one joke premise about how degrading it is to be vice president of the United States --one former v.p. said it was about as important as a pitcher of warm spit.
Silicon Valley in its return turns a real life tragedy into a central situation that's as laughable as the time Chuckles the clown died on the old Mary Tyler Moore Show.
I'll start with Silicon Valley because it's on first on HBO Canada Sunday night at 10.
When I watched the first season I thought all the actors were droll.
The laughs are deliberately small, no big chuckles here.
But the more episodes I watched the more involved I became in this sad sack firm.
Above all I thought the wonderfully talented actor Christopher Evan Welch simply great as the impossibly demanding tech mogul Peter Gregory.
Sadly Welch passed away during the hiatus so the series creators (Mike Judge, John Alschuler and Dave Krinsky)  incorporated that tragedy into the theme of the first new episode and as with every segment it has a droll, earnest feeling I think entirely right.
Silicon Valley takes the world of high tech and shows how even that far up there are a bunch of zanies not quite sure what they've invented.
The talented cast are true ensemble comic actorts: Thomas Middleditch (Richard), Aly Maewji (Aly), Josh Brenner (Big Head).
I'm so glad it's back.
Veep follows at 10:30 on HBO Canada.
Of all the Seinfeld gang Julia Louis-Dreyfus remains the one still gainfully employed constantly on TV and that's because she's so good.
She had to go through moments of great mortification as VP and now as President Selina Meyer she's determined to treat her VP just as comically shoddy.
This one is definitely not a room com. The gifted actors do not shout out funny lines to a studio audience and then wait for the laughs.
Rather they are always on the go --hand held cameras follow them dashing through the corridors of the White House which is one great continuous set.
But I like best the quiet moments of reflection which put into perspective what the team means to each other.
Phil Reeves as the new VP is terrific. But Louis-Dreyfus is at the peak of her game --she's brilliant in one scene where her character delivering a first speech to Congress discovers that her speech prompter has stuck.
And what a grand back up cast of comics feeding her lines and situations: Matt Walsh as Mike, Anna Chlumsky as Amy, Reid Scott as Dan, Gary Cole as Kent.
Amy sums up the scattered response to crises the best:"I feel like I'm on a life support system and they keep unplugging it to charge their phones."
A friend who watched with me yjen wondered why Canadian TV can't compete this way --after all Veep is made for cable TV costs.
And I had to explain that we did have a short term sitcom about a bundling but retired ex-prime minister titled EX-PM but CBC made two episodes and then fearful of Ottawa's reaction cancelled it.
Right now there's only one sitcom surviving on Canadian TV: Schitt's Creek on CBC. Citytv's Seed won't be back because it failed to sell to a big U.S. network.
SILICON VALLEY'S NEW SEASON PREMIERES ON HJBO CANADA SUNDAY APRIL 12 AT 10 P.M.
MY RATING: ***.
VEEP'S NEW SEASON PREMIERES ON HBO CANADA SUNDAY APRIL 12 AT 10:390 P.M.
MY RATING: ***1/2. 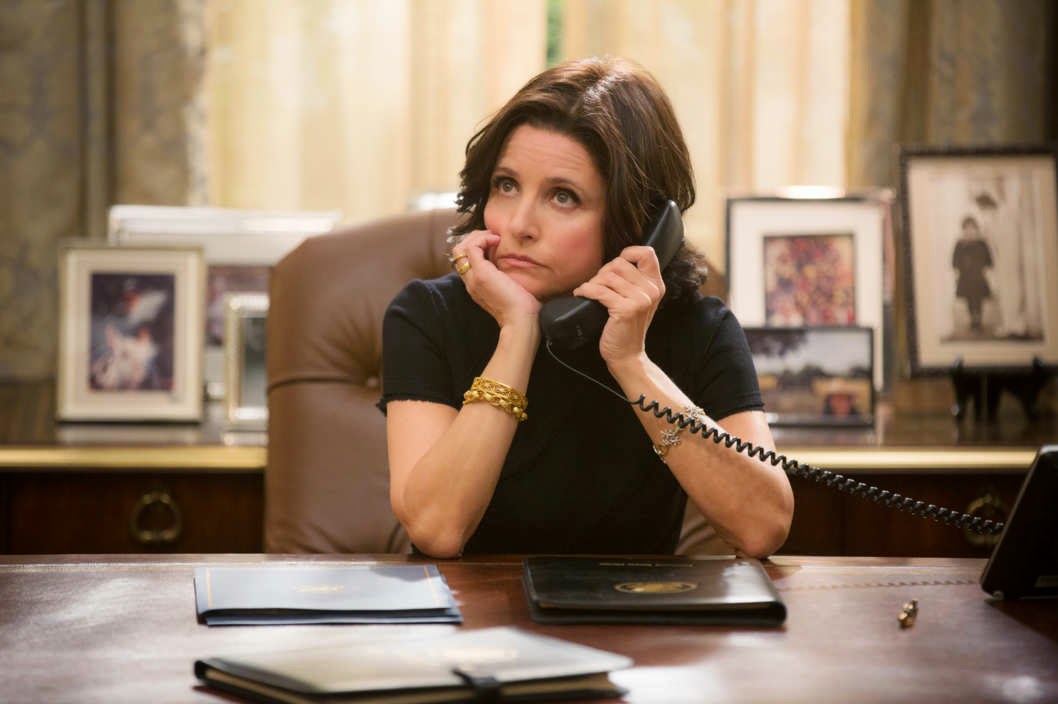