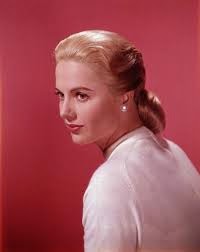 It was 8 a.m. and the telephone in my Century Plaza hotel room kept ringing.
Finally I picked up and the sultry voice said "James, confirming your interview today.
"The limousine will pick you up at precisely 9:30 a.m."
"But I thought this was for lunch?" I said.
"James!" The voice was irritated by now.
"We're at our Rancho Mirage pad today. It will take the driver three hours to get you here. See you then!"
That was Martha Hyer. The date was July, 1982, and I was about to embark on one of my greatest Hollywood adventures.
I'm remembering that day after reading that Martha Hyer Wallis died at her Santa Fe home on May 31, aged 89.
"You're the last person to interview me!" she laughed when we last chatted on the phone about a year ago.
In 1982 CBC was running a Martha Hyer Film Festival late nights and I just had to see the stunning blonde actress in person so I wrote to her in advance of my trip to Los Angeles..
I should also mention Martha Hyer was married to the greatest movie producer of all time --Hal Wallis whose credits included The Maltese Falcon, Casablanca, Come Back Little Sheba, True Grit --over 300 films in all.
He also discovered Errol Flynn, Burt Lancaster, Kirk Douglas, Charlton Heston --and Martin and Lewis and even signed Elvis Presley to a lucrative movie career.
Exactly at 9:30 the stretch limo pulled up and I was off --I joked to the driver my tiny bachelor apartment back home wasn't half as large.
There was room in the back for a small couch, a well stocked bar and fridge and even a TV set.
And exactly three hours later there I was at the gorgeous Palm Springs estate of Mr. and Mrs. Wallis.
I had the grand tour and out in the back yard Martha Hyer kept snapping pictures of the three of us snatching oranges from the trees or sitting around the pool.
Later came a lavish lunch at the country club --the Wallis estate backed onto a golf course and across the street was the Eisenhower Medical Center which Wallis had helped finance --"at my age I like to be near a state-of-the-art hospital.," he joked.
Martha Hyer turned out to be just as beautiful and gracious in person as I had always imagined her to be.
Born in 1924 in Fort Worth Texas, she was the daughter of Julien C. Hyer who took part in the Nuremberg trials.
After graduating in drama at Northwestern University, she signed a deal with RKO Pictures and made her movie debut in Thunder Mountain (1947) "a terrible Tim Holt western.
"RKO saw me as a cowgirl on the range. Then I was signed by Universal and played second fiddle to Abbott and Costello and Francis The Talking Mule.
"Billy Wilder saw something classy in my looks and I had the second femme lead in Sabrina (1954) where I was Bill Holden's socialite gal friend and lost him temporarily to Audrey Hepburn.
"Then I lost Cary Grant to Sophia Loren in Houseboat (1954) --but at least I was upper class."
Vincente Minnelli insisted she be cast as Frank Sinatra's bookish girl friend in Some Came Running (1958) and for a time she had a hot career and even copped an Oscar nomination.
"Frankie was magical and the scene where he seduces me as I start to cry made an impact. Oscar night I was a bundle of nerves. Had I won I think I would have shot up as a box office star."
Hyer told me her biggest disappointment of all came with her co-starring role in The Best Of Everything (1959) an all star soap opera that featured Joan Crawford, Hope Lange and Suzy Parker.
"I had my scenes with Don Harron who was so intense audiences reacted unfavorably at the previews and many of our scenes were slashed to the bone."
Then came more disappointment with Psycho (1961).
"Alfred Hitchcock told me I'd get the part of Marion Crane if Janet Leigh turned him down. But Janet took it and the shower scene made her red hot. I cried for days after that rejection."
So Hyer settled for leading lady status to the likes of Richard Burton (Ice Palace), Robert Mitchum (The Last Time I Saw Archie), George Peppard (The Carpetbaggers) and John Wayne (The Sons Of Katie Elder).
Her favorite role?
"As the alcoholic wife of Bobby Duvall in The Chase (1966). What a cast we had: Brando, Redford, Jane Fonda, James Fox, E.G. Marshall, script by Lillian Hellman and direction by Arthur Penn. And it laid the biggest egg!"
She last acted in 1971"in a stinker called Day Of The Wolves".
But Hyer rewrote much of the dialogue for a Hal Wallis picture--1975's Rooster Cogburn which co-starred John Wayne and Katharine Hepburn.
Wallis died in 1986 and Hyer phoned to tell me that "Hal was very stoical near the end. No complaints --after all he had one of the greatest ever movie careers."
She found life without Wallis "very difficult" and later moved to Santa Fe to escape the memories.
Martha Hyer Wallis died on May 31, aged 89, and I have lost one of my best friends from that golden age of movie making.