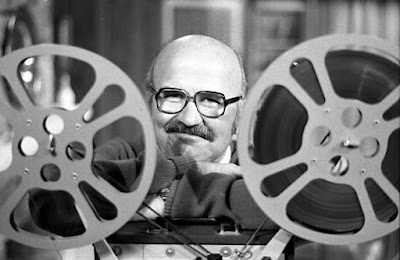 "You've created a monster!" snapped Elwy Yost during one of our annual lunches.
The erstwhile star of TVOntario's Saturday Night At The Movies was talking about my interviews with Yost that began appearing first in The Hamilton Spectator and later in The Toronto Star.
I'd carefully quote Yost complete with his assortment of lines: "Golly gee" or "Gloriously golden" and especially his boast "I never saw a movie I didn't like."
Elwy protested he was nothing like the overly enthusiastic host who simply loved old movies no matter how bad they might be. But he certainly was and that's why viewers adored him.
Yost who passed Thursday at his B.C. home at the age of 86 was one of a small band who put TVOntario on the map.
In 1977 his weekly old movie show was drawing 500,000 viewers across Southern Ontario., and only CBC's NHL hockey was bettering it.
Don't forget in those days it was a 10-channel TV universe. There were no specialty channels like Turner Classic Movies and VHS was only beginning to appear. There was no pay TV, no regularly scheduled old movie palaces such as exist today at the Toronto Film Festival site.
As far as old movies go Elwy was it. And his huge success startled the competition.
CBC had employees tracking the show to make sure every installment included the obligatory educationalist talking about the movie while CFTO president John Bassett publicly complained to the CRTC about the sheer effrontery of a public TV outlet showing old films..
Finally rival stations started buying up packages of old movies just to make sure Yost did not get his hands on them.
Yost kept fans watching despite his bumbling ways.
He came across like the ex-high school teacher he really was. He'd talk about movies in a matter-of-fact way that wasn't academic. And he let his enthusiasms run riot in the yearly excursions to Los Angeles to interview his gloriously golden stars of another era.
"We started in 1974," remembers Bruce Pittman who was Yost's first director. TVO head programmer Jim Hanley had a block of Ingmar Bergman movies he wanted to show and selected Yost as the host. Later on RKO titles were added but Yost never was able to get any of those juicy Warners titles he so coveted --the price was too high.
Other stations had dropped old black and white movies as no longer economically viable but Yost showed otherwise.
"Our studio was in the basement of TVO at Yonge and Eglinton," remembers Pittman. "Right over the subway line which we felt every time a train passed by."
"With Yost what you saw was what you got. People just liked him."
Pittman and Yost would travel to L.A. for a week every summer to gather material. "The people we sought out would be in the movies we'd picked for the next season. They were delighted to be treated this way. But it was all on the cheap. We stayed with friends. I'd go a week early to start scouting talent. The only cost was the film stock."
"One thing about those interviews. I never filmed Elwy's reaction shots. I didn't want him to become another Brian Linehan where Linehan's interjections became more important than the subjects he was interviewing."
Born in Weston he was the son of Elwy Honderich Yost --and a cousin of Beland Honderich, the once powerful publisher of the Toronto Star.
"I first flunked out of engineering at University of Toronto," he once told me, "before switching to sociology and graduating in 1923. At one point I wanted to become a movie critic but I worked at the Star in the circulation department where I met my future wife Lila. We then toured Europe and I can be glimpsed as an extra in the 1952 John Huston movie Toronto in Foliles Bergere. Then I worked At Avro Arrow until it folded in 1959. I also taught English at Burnamthorpe Collegiate."
As an English teacher he'd dress up like Sherlock Hol;mes when teaching The Hound Of The Baskervilles.
Yost's effusive personality charmed all his subjects but he could get quite sentimental.
When scheduled to meet actress Patricia Medina in Los Angeles for an interview he was pleasantly surprised to see she was accompanied by her husband Joseph Cotten star of Yost's favorite ever film Citizen Kane.
'"Kane...Kane!" blubbered Yost as Cotten took his hankerchief and dried Yost's watery eyes.
I was at the Academy Awards library one day when the Yost crew came in for filming. I told him he'd missed by minutes the elusive silent screen star Mary Miles Minter and he was thoroughly miffed.
Yost took early retirement from TVO in 1987 passing the baton to his producer Risa Shuman who began selecting the films. But he returned several times a year from his new Vancouver base to tape his introductions. After his final retirement in 1999 he jumped to Book TV and did a year of introducing old movies --a neighbor loaned his library as the perfect site.
Yost also hosted a daily series Magic Shadows as well as a weekly show Passport To Adventure. In 2003 he wrote a mystery novel White Shadows and completed another huge manuscript he was never able to sell.
In 2005 he told me he was recovering from surgery but was "making progress".
He leaves wife Lila as well as sons Graham,an L.A. screen writer (Speed) and Christopher. Graham once told me he remembered skipping public school one day to attend a screening of Citizen Kane with his father and having Yost write a letter of explanation to his teacheer.
In 1999 he was made a member of the Order Of Canada.
And Yost's interviews have been repackaged for the TVO series Film 101. He can still be heard going on and on about his faves from the Golden Age.
Posted by james bawden at 4:42 PM

It's sad to see him go. I always enjoyed the insight and enthusiasm with which he introduced the movies he loved.

I will never forget him. As a teenagers, my friends & I would get a laugh from (at) him, but we did watch "Magic Shadows" & "Saturday Night at the Movies".

What will always recall, was his comment on the movie "Heaven's Gate"..."it could use some editing".

It was in 1975, as a fresh 14 year old classic movie buff that I first met Elwy and Lila in the restaurant at the Orillia Holiday Inn, where they'd stopped for lunch on their way to the cottage; and after telling him that I was a fan of his, he replied, "So You're the One!" I figure he left just such a touch upon everyone who encountered him.

Coincidentally, I moved from ON to BC in 1989, and seredipitously reunited at a repetoire screening of Cooper & Schoedsack's "King Kong." A few years later, Elwy hosted a series of Sunday Night(s) at the Movies for The Knowledge Network/Open Learning Agency on channel 5. On one particularly lovely and very grand viewer appreciation day, I showed up to reconnect with Elwy; have him sign my treasured copy of his book, "Magic Moments from the Movies,"; talk again about old movies; but especially to give him the front-piece of the spare copy I'd kept of Toronto Star's TV Week publication from 1976, with his wide-smiling, darker-haired, pipe-holding visage gracing the cover. His much, much younger Knowledge Network co-workers got just as big a kick out of it as Elwy did. How many of us he mentored without ever knowing, cannot be counted.

I remember how proud he was to have appeared briefly as an extra, during a Can-Can dance sequence, early on in John Huston's 1952 "Moulin Rouge." You can't miss him, sitting at a table, smiling as wide as the sky!

Yes I realize its late Novemeber but I've just found out that Elwy (I hope he wouldn't mind me calling him that) passed away this summer.
Magic Shadows was THE show for me. I watched it every week night for years. Elwy taught me so much about movies that I try to teach my kids but I'm sure a poor imitiation. Thank you Elwy for all the years of entertainment and we bit of education too. It was jolly good fun! Robert B.