Torchwood Is Finally Back, Sort Of 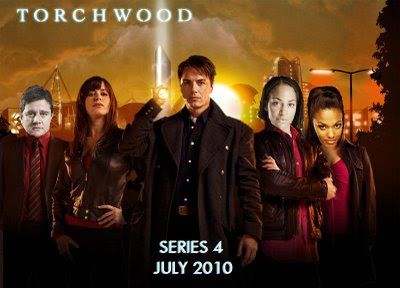 The fourth and probably last season of Torchwood is about to begin.
The final 10-part miniseries was filmed in the U.S. while the first three seasons were made by BBC Wales.
I can't think of another British dramatic series that was directly transported to America for an entire season. Can you?
Russell T. Davies, the creator, persuaded the U.S. pay TV weblet Starz to finance a fourth year after BBC declined.
Then he killed of everybody save charismatic hero Captain Jack (John Barrowman) and Gwen Cooper (Eve Myles) and plopped them into a new storyline set smack dab in America.
Oh, I'm not thinking of American versions of British hits (like All In The Family or Beacon Hill).
In fact Davies' Queer As Folk wound up in a newly instant U.S. remake but that one was filmed in Toronto.
Come to think of it why wasn't the all new Torchwood filmed in T.O.?
Wait! Another example Ijust came to me and it's the six-part BBC 2006 miniseries The State Within filmed almost entirely in Canada with Toronto substituting (very shakily) for Washington D.C.
In last year's shortened five-episode Torchwood arc Captain Jack not only lost his lover Ianto (Gareth David-Lloyd) but he also had to sacrifice his grandson Steven Carter (Bear McCausland).
Last year's story was all out scary as a master race monster plotted to abduct all the earth's children. Gulp!
This time out it's called Miracle Day and simply stated nobody in the whole world is going to die for the time being.
And the reason we know is from the first startling scene as a convicted killer and pedophile (Bill Pullman) gets his expected execution dose of lethal poisons only to surprisingly survive.
If that sounds a bit overly familiar wasn't that the premise of The classic sci fier The Day The Earth Stood Still? Nobody dies?
These days it means a lot of fuss and bother. Bodies start piling up in hospitals with the desperate ill --people who want to expire but can't.
The kicker is Western civilization needs death to cull its population --without natural ends our whole society quickly gets gummed up.
In short everybody's immortal. Everybody's a Captain Jack except the good Captain who discovers in his first few scenes that he now is mortal.
Have I given away too much story? Sorry but I don't think so. But I was sad to bid farewell to Wales and that wonderfully atmospheric set where the forces of good worked.
The locations in Miracle Day so far seem rather humdrum. And Jack is almost a peripheral figure in the first new hour. Eve Myles has more to do because she and her long suffering husband now have a baby. Can she go back to fighting crime or should she stay holed up in her little Welsh cottage?
Judging from the spoilers I've seen Captain Jack's sex life will be unchanged --and that has to be a gamble with vast throngs of right wing Americans currently on the warpath and fighting for family values.
So far Torchwood 4 doesn't quite have the style and panache of its predecessors. Hopefully that will change as the story unfolds and the jittery Brit actors get over their fears of working at Warner Brothers in Burbank.
I know I'll keep watching and rooting for Captain Jack.
But I wonder if a summer run instead of a fall prime time berth indicated some nervousness at Starz over the American public's response to material outside their confort zone?
TORCHWOOD PREMIERES ON SPACE ON SAT. JULY 9 AT 9 P.M.
MY RATING: ***.
Posted by james bawden at 12:53 AM

Not directly, but gosh there's been tons of shows like the failed "Life on Mars" which we've tried to duplicate. The nice thing here, is it's success or failure in the states won't be a determination of whether the series continues.

U.S. series MacGyver filmed in L.A., then Vancouver, then back to L.A. during its run. But its 'locale' was always the same. And cable detective Monk went from first season filming in Toronto then to the States. Yet, again it was always as its U.S. city locale.