This TV Series Should Be Re-Titled The Cat Whisperer! 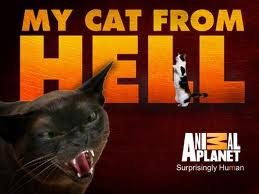 Had a chance to briefly chat up the incredibly named Jackson Galaxy whose short run series My Cat From Hell continues on Animal Planet Tuesd. July 12 at 7 p.m.
It's a three-episode "starter" series and Galaxy reports based on audience response for the first episode Animal Planet has ordered a six-episode arc that will be filmed shortly.
Described in the notes as a "cat behavioralist" Galaxy spends much of his time making house calls to evaluate odd behavior from a wide variety of cats.
And he seemed to accept my criticism that the series should really be titled "The Cat Whisperer" which is exactly what he is.
"My Cat From Hell just got Animal Planet's attention," he laughs. "And viewer, too, because apparently it's a common expression."
But Galaxy adds most cats aren't from hell at all.
"They're just being cats. I don't want to train your cat to pee onto the toilet or not to jump up on the kitchen table. That's not what this show is all about."
It's about analyzing why situations go bad for cats and their owners. And it evolves educating both cats and humans.
"Cats have bad days, they do. they can experience mental health issues. Only these days I'm making my rounds with a camera crew following me. That's extra strain on the cat --bright TV lights, sometimes 12 people milling around. And Animal Planet was right;y sceptical I could make it work."
A pilot was shot a year ago just to prove kitty cat could be as appealing as a dog.
"We shoot lots and lots of footage. Cats don't do things on demand you see. It boils down to technique. And every once in a while I'd just call a break for a few hours with the cat hiding under the bed."
Galaxy says he uses no tricks." It can get very frustrating.for our subjects. Must be stressing them out like heck. But you know we are getting at it."
He looks like such a tough dude with his shaved pate and goatee. But he talks a good line with the cats. And sometimes it seems the owners need more help than their furry pets. In many cases it's the humans who must adjust by setting up cat play stations. One dude is even pressed into taking his fiancee's cat out on a leash for walks.
Galaxy says growing up "I was a dog guy" and only switched when a college girl friend brought home a kitty. Seven years later he was volunteering at an animal shelter and from there started developing empathy for cats.
"Look, respect the animal. That's the biggest rule."
My alloted time is just about up. No time to tell Galaxy about the troubles I'm facing with my cat, Bear, who seems to think the house is hers and I'm simply the valet. Or maybe I should simply invite Galaxy over to make an episode right here?
MY CAT FROM HELL IS ON ANIMAL PLANET TUESD. JULY 12 AT 7 P.M.
Posted by james bawden at 11:41 PM

Great program, and Jackson Galaxy is the real deal for knowing cats and how to help their owners be better companions and guardians.