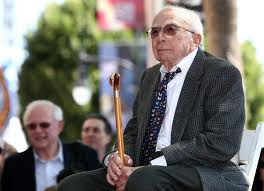 It was my first visit to Los Angeles, the summer of 1971, and there I was on the set of Mission:Impossible.
But the gang I was talking to were The Brady Bunch.
Both shows shot side by side on the gigantic Paramount back lot along Melrose Avenue.
And I had time to kill until star Peter Graves was available to talk so I looked up and saw Ann B. Davis emerging from a sargophagus. It was a key prop on the MI set that day and as a gag Davis had stashed inside and popped out when Graves opened the gigantic tomb. Graves was not amused because he'd have to do it again.
But all those Brady kids were lined up right there behind the cameras laughing up a storm.
I'm telling my Brady Bunch anecdote because series creator Sherwood Schartz just died at 94.
We became instant pals when I told him later that day as I'd finally hit The Brady Bunch set that I adored Gilligan's Island which he also created.
"We thought we had a stinker on that one," he laughed. "Nobody could understand the premise until I sat down and wrote the theme song which explained everything that had happened including the shipwreck and who the survivors were."
Gilligan's Island lasted a mere three seasons --although it's been in reruns ever since. But Schwartz told me where I could still find the lagoon --it was on the MTM lot. Remember this was 1971. Years later it was all paved over to make way for a new soundstage.
With The Brady Bunch Schwartz said he took a chance hiring Florence Henderson as Carol Brady "because she was a big musical star. But I saw in her the needed warmth and also the humor."
"Robert Reed had been a terrifically talented young dramatic actor on The Defenders. He was astounded to be in such a huge hit."
Born in 1916 in Passaic, New Jersey, Sherwood had his first TV hit as chief writer on the 1963 sitcom I Married Joan starring Joan Davis. Then for eight seasons (1954-62) Schwartz was chief writer for The Red Skelton Show.
Gilligan's Island came next. Schwartz wrote and produced it for 77 episodes (1964-67).
The Brady Bunch originally ran 92 episodes from 1970 through 1974.
Then came some flops Schwartz cherished: 1973's Dusty's Trail and 1976's Big Kohn, Little John.
But Schwartz was not through with The Brady Bunch. In 1976 he roared back with The Brady Bunch Hour and in 1981 there came the inevitable sequel The Brady Brides. I remember having a lunch interview with him on that last one and he was as nice and unpretentious as ever. Then in 1991 came yet another series The Bradys.
If death had not intervened a possible future series would surely have been The Brady Seniors.
There was one last sitcom Harper Valley P.T.A. with Barbara Eden in 1981.
And last year I heard he was up for a movie remake of Gilligan's Island with Michael Cera in the lead.
Sherwood Schwartz long ago figured out how to survive in the cutthroat TV business: keep 'em laughing and laughing.
Posted by james bawden at 11:34 PM