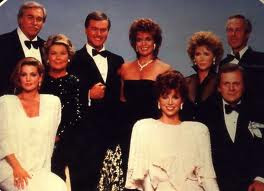 I hate to be the bearer of bad news but I've just read they're trying to resuscitate Dallas. Again.
Every year or so somebody comes forth with a lame brained attempt to bring back an old show in new glory.
Well, it didn't work when CBS revived The Fugitive in 2000 with Tim Daly now cast as Dr. Richard Kimble.
Fans of the original series may have glanced but quickly shrugged and tuned out. The world had changed. And just as important that story was all used up.
It was the same this season when PBS's Masterpiece THeater unveiled a perfectly dreadful sequel to the legendary Upstairs, Downstairs (1971-75).
It had the same title and the same address: 165 Eaton Place but something was missing.
Like the original cast --most of the actors had died off and only series co-creator Jean Marsh was back as bland and boring Rose.
Now set in 1936, the show no longer made sense as the oncoming war had seriously dented the whole aura of the British aristocracy.
I well remember the excitement in 2000 when it was announced Mary Tyler Moore and Valerie Harper would be reunited in a TV movie called Mary And Rhoda, the proposed pilot for a "new" series.
Airing as a TV movie on NBC this was awful stuff.
I've tried to block it out but I do remember Mary's daughter's name was Rhoda and Rhoda's daughter was named --you guessed it --Mary.
Viewer response was so tepid the proposed reunion series was cancelled.
Then there was the 1978 TV movie The New Maverick with Charles Frank as Ben Maverick and James Garner back as Bret.
Garner would then star in a full scale TV series comeback in Bret Maverick (1981) which freely borrowed from his hit 1957 TV series but in all ways was a pale copy. It lasted 18 episodes.
Bret had always been a drifter but here he had settled down, a key mistake that original creator Roy Huggins claimed doomed the new show from the start.
I could go on. The new Bionic Woman was terrible. This upcoming season there'll be yet another attempt to revive Charlie's Angels --there have been two failed TV attempts so far.
The only Canadian attempt to revive the dead was the series of Beachcombers movies a few years back which flopped because star Bruno Gerussi was long dead.
Now over to Dallas. For years a movie version starring John Travolta was touted.
But TNT has now signed for a 10-episode series to run next summer.
Former stars Larry Hagman, Patrick Duffy and Linda Gray will return in their original roles but the plot focuses on the next generation
Cynthia Cidre (The Mambo Kings) has written the pilot script and Josh Henderson (90210) and Jesse Metcalfe have the leads and Jprdana Brewster is the love triangle gal.
Originally Dallas ran from 1978 through 1991.
But 20 years later does anybody really care?
Haven't we all moved on --and on.
Posted by james bawden at 9:23 PM