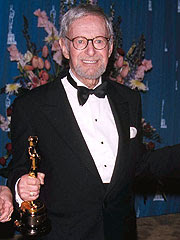 Tuesday is Ernest Lehman's birthday.
There will now be a pause for you to squirm and say Who the heck is Ernest Lehman anyway?"
Only one of the greatest of the movie screenwriters, that's who.
So it's entirely appropriate for Turner Classic Movies to honor him --he would be 94 (but died at 89 in 2005).
But how crazy is this: the tribute revs up Tuesday at 9 a.m. when most of us are out working or going to school.
However, it's better than nothingn so here goes: The wonderful drama about the business world, Executive Suite, is on TCM at 9. It's followed at 11 a.m. by Paul Newman in Somebody Up there Likes Me.
At 1 p.m. there's Lehman's personal fave: North By Northwest. At 3:30 p.m. it's the Prize. And at 5:45 there's Family Plot.
I once sneaked out of those deadly dull TV critics press tours in L.A. for tea with Lehman at his spacious Bel Air residence.
He regaled me witth witty anecdotes about the writing of such classics as Sweet Smell Of Success, Hello, Dolly, Dr. Doolittle and Who's Afraid Of Virginia Woolf?. All delightful but none of these films gets included in this TCM salute.
And remember Lehman is the only screenwriter to have been awarded an honorary Oscar.
Maybe TCM is saving the big titles for a future prime time salute? One can only hope.
Posted by james bawden at 11:40 PM