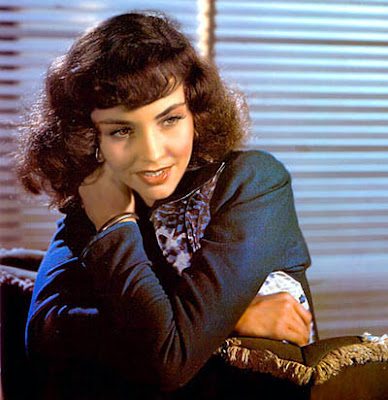 Yes, I actually did meet Jennifer Jones, the iconic movie star who passed away last week, aged 90.
I said I met her, not interviewed her and there's a whole lot of difference.
It was in the summer of 1974 when I was covering the TV critics tour at the Century Plaza hotel in Century City once the backlot of Twentieth Century-Fox motion pictures.
A bunch of us --I think four or five --were invited during the lunch break to visit the set of the disaster movie currently shooting, the star studded The Towering Inferno.
So we ducked out of a boring lunch Q and A and literally tip toed down the corridor, sprinting out the back door and onto the sound stages of Fox.
And that's when I spotted the great actress who was always one of my faves. Jennifer and Fred Astaire were dancing in a scene complete with extras.
At 55 she still looked snazzy, all dolled up with a beehive hairdo and a sparkling smile. Astaire, 75, looked immaculate as he dipped and swayed his leading lady.
And director Irwin Allen bawled "Cut!Print! And he guided Jones and Astaire over to our small group of observers to say hello.
The mere mention of press being present caused Jones to emit funny gurgling sounds and dash for her dressing room. However, the always amiable Astaire stayed for a nice, long chat before waving goodbye and disappearing for lunch.
And that's how I met Jennifer Jones. And did not interview her.
To say the great star was reclusive would be an understatement.
She never gave interviews and generally kept to herself. And The Towering Inferno was her last picture even though it was a huge hit.
For years she and billionaire husband Norton Simon tried making a movie version of Terms Of Endearment but they eventually gave up, selling the rights --the movie that finally came out starred Shirley MacLaine who won an Oscar for it.
Jones never appeared on a TV talk show but fans could glimpse her at various industry functions. She was an Oscar presenter and made appearances at AFI salutes to Lillian Gish, Gregory Peck and John Huston.
And there's her substantial body of film classics many of which hold up. She won her Oscar in 1943 for The Song Of Bernadette playing the dewey eyed saint with great fervour.
She was also Oscar nominated for Since You Went Away in 1944, Love Letters in 1945 and Love Is A Many Splendored Thing in 1955.
Many felt she would have gone even farther without the obsessive control of second husband Davd O.Selznick--after he made Gone With The Wind in 1939 his projects became ever bigger and bloated. He positively forbade her to star in the 1944 classic Laura which turned Gene Tierney into a huge star.
Some of the films Jones made way from Selznick are among her best including Cluny Brown (1946), Madame Bovary (1949), Beat The Devil (1953) and The Man In The Grey Flannel Suite (1956).
For Selznick she also made the overblown Portrait Of Jennie (1949), Ruby Gentry and the 1957 version of A Farewell To Arms where she was badly miscast as the older nurse to Rock Hudson's young lover.
And she was simply too old to star in 1962's Tender Is The Night.
After Selnzinck's Death in 1961 her career faded away.
Jones married industrialist Norton Simon in 1971 and became chairman of his great art museum after his death at 86 in 1993.
She leaves a son by her first marriage to the late actor Robert Walker but Robert Walker Jr. hasn't had the success his father had.
What we have left are a pretty impressive bunch of movies featuring one of the last great stars of Hollywood's Golden Age. With Jones' passing only sisters Olivia de Havilland and Joan Fontaine are left among Oscar winners from the 1940s --plus Luise Rainer from the 1930s.
Posted by james bawden at 9:35 PM