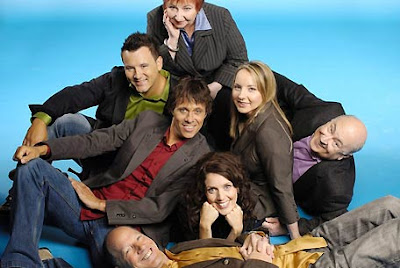 They're b-a-c-k! Those wacky denizens of Royal Canadian Air Farce, I mean.
Exactly a year after getting the cancellation boot from CBC, RCAF has regrouped and come forward with its 17th annual New Year's Eve salute.
It's a must see for all supporters of Canadian TV.
In the name of journalistic fairness I trudged down to the cavernous and now largely empty CBC headquarters on Front St. E. to watch a Friday night taping of the whole shebang.
I thought I was in the wrong place because the RCAF tapings I always attended were next door --still on the 10th floor but down the hall.
Then I was told that studio which is actually named after RCAF is now the home of Don Cherry and Dan McLean's shenanigans for Hockey Night In Canada. The RCAF special was being taped next door.
An initial taping had taken place the night before and the best scenes from both shows will get combined into one 46-minute special (plus 16 minutes for commercials).
It was quite a chore sitting in those bleachers and waiting and waiting for the scenery to be set up so the next skit could go forward.
But I wouldn't have missed this for the world --and neither should you when it all revs up on CBC-TV on Thurs. Dec. 31 at 8 p.m. with a midnight rerun.
My first impression: why oh why did the current batch of CBC programmers try to kill off one of their best franchises?
I keep hearing RACF ratings held up pretty well --at least better than the trendy Being Erica.
But RACF audiences were growing slightly older and are no longer targeted by the big sponsors (outside of Polident and Viagra).
It took three hours to get this thing taped but there were so many laughs I had to ask veteran director Perry Rosemond how he'd manage to fit in all the great material.
"We need 90 minutes or even two hours," he grinned. "There's such a richness. I don't know what to cut."
Some of the skits really hit home. Like Penelope Corrin's savagely funny take on a befuddled Sarah Palin.
Or a parody show called Luck Of The Puck with Battle Of The Blades winners Jamie Sale and Craig Simpson who obligimngly battled on ice to the consternation of Craig Lauzon as Don Cherry..
Luba Goy did her Nancy Wilson shick to perfection. Another parody had Alan Park expertly taking on Sham-Wow pitchman Vince. A Save Local TV gag ad was nastily right on.
It was strange but we never even saw Don Ferguson until the second hour --his take on a mad scientist was vintage Ferguson. And what about the new device called the iPolanski?
I honestly would not want to have the job of cutting out almost half the material performed that night.
I reminded Rosemond I've been covering RCAF since 1975 when they were exclusively on radio.
One big let down was the absence of regular Jessica Holmes who was on the stage in Christmas panto and couldn't make it.
I kept thinking original founding father Dave Broadfoot might pop up in a cameo but it was not to be. We can't have everything. Maybe next year?
In short I'm arguing CBC TV still desperately needs this often brilliant Canadian comedy institution.
CBC'S RCAF NEW YEAR'S EVE SPECIAL IS ON THURS. DEC. 31 AT 8 P.M.
Posted by james bawden at 10:40 PM