Farrah Was A Fighter 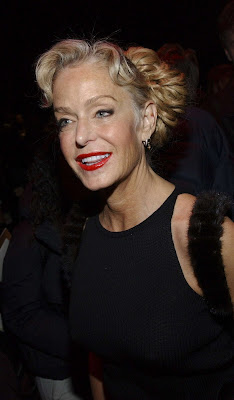 Yeah, I was there the night Farrah became Farrah.
Let me explain. It was on a sweltering evening in July, 1976, and the TV critics were out in force at the swank Century Plaza hotel in Century City. We all wanted to watch the new series Charlie's Angels which originally aired as a TV movie on ABC in March and had gone through the roof ratings wise.
It was an awful piece of tripe: three gorgeous young things play detective supervised by an unseen boss named Charlie (voice courtesy of John Forsythe).
VIewers got to see Kate Jackson, Jaclyn Smith and Farrah Fawcett-Majors (as she was then) frolic in the California surf, flounce around in t-shirts and shorts or pose as masseurs or models or anything that seemed sexy.
Nobody expected this one to go anywhere. It was up against a much anticipated new CBS show Blue Knight with George Kennedy and a fine new NBC western Oregon Trail with Tim Matheson and Kurt Russell.
But when the dust cleared Charlie's Angels won and quickly became a TV phenomenon.
I found Kate Jackson as poised as ever --she'd already starred in two TV hits, The Rookies and Dark Shadows.
And there was lovely brunette Jaclyn Smith, cool, poised, the best looking of the bunch.
But that night the TV critics only wanted to meet Farrah. The Farrah frenzy had just begun.
Farrah's wily manager, Jay Bernstein, started it with that poster. You know the one that sold 12 million copies.
But at the end of the first season, egged on by Bernstein, Farrah made a big mistake. She quit the show to become a movie star and CA executive producer Aaron Spelling retaliated with an injuction preventing her from working elsewhere.
Eventually a compromise was reached: Farrah would guest on CA at least once a year and Cheryl Ladd was signed to play her look alike sister.
But the movies Farrah made (including Sunburn and Saturn 3) flopped badly. Farrah might be a star but she had yet to learn to act.
To her credit Farrah persevered. She was outstanding in an off Broadway play, Extremities. She excelled in such YV movie fare as The Burning Bed, the Beate Klarsfeld Story and Poor Little Rich Girl (as Barbara Hutton).
And after divorcing Lee Majors as Farrah Fawcett she had a long and successful relationship with Ryan O'Neal.
When I chatted with her in 1995 on the Toronto TV set of Jewel she was poised. condident and absolutely in command acting wise.
But I still missed the Texas sweetheart I first met that night in 1976.
Farrah succumbed to cancer aged 62 after years of courageous fighting, But the way the mainstream media ignored her story for Michael Jackson's passing was unfair and rather cruel.
Posted by james bawden at 1:37 AM