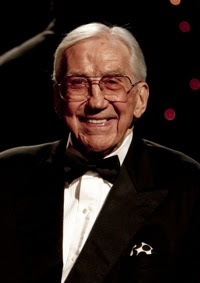 "Of course I know I'm lucky," chortled Ed McMahon over the telephone during our last chat.
He was on the line from his L.A. home to promote a "one man" show at Toronto's Music Hall theater.
That must have been more than two years ago but McMahon sounded as chipper as ever.
He claimed he'd licked prostate cancer and was raring to get back into the swim of things. but he was also in his early '80s and old pal Johnny Carson was dead.
So McMahon packaged an evening of clips from the old Tonight Show and took it on the road to U.S. cities plus Toronto.
"I don't have to work but I must work, get that?" he chattered. He meant he was financially well heeled but had to get out and be active. It was simply his nature.
I reminded him the first time we met was out at Burbank sometime in the early 1980s.
I spent the day in the Tonight Show production offices following around director Freddie de Cordova.
I sometimes spotted Johnny Carson in the background and he had been told of my presence. But he never came near me. Assistants whispered he was too shy --or maybe he was just too busy.
McMahon stopped to chat a bit then excused himself for makeup and hair. I remember him stating he was perfectly content with his second banana status.
When Carson was vacationing McMahon refused to take over. It was a different job and required skills he did not possess, he said.
But he never was Carson's stooge. Joan Rivers remembered when she had her famous fracaswith Carson and was banished from the show it was McMahon who came over to her house for a pleasant chat.
He wasn't going to be bossed around by Carson, not then, not ever.
And we chattered again a few years later when I was out at the Disney studios and he was promoting a TV movie appearance he'd done for Disney.
With McMahon what you saw was what you got.
"People don't tune in NBC at 11:30, to see what I'm up to" he said. "They want to find out what Carson's going to say about the day's events."
His big break came in 1957 when he was signed by Carson as the announcer of the new daytime game show Who Do you trust. And when Carson jumped to the Tonight Show in 1962 McMahon obligingly followed him.
We heard him first every night: "Heeeeeeeeere's Johnny!".
His job was to laugh at all of Carson's jokes and serve as the butt of one liners. Carson would needle him endlessly about his alleged alcoholism and his rotund appearance.
In the early years when the show came from New York McMahon also doubled as host of daytime's Concentration game show.
He appeared in such movies as The Incident (1967) and Fun With Dick And Jane (1977). He was co-host of the annual Jerry Lewis telethon.
But most of all he sold anything and everything.
McMahon was TV's top huckster. In recent years he was peddling electric wheelchairs for Pride Mobility. Before that it was pots and pans on the Home Shopping Network.
And the surprise is he loved it, rarely turned down a gig and claimed his house was filled with all the stuff he'd peddled over the decades. In fact one of his last appearances came last year on Larry King as his L.A. home was about to be taken for back taxes --Donald Trump came to the rescue.
His death at 86 the other day was from bone cancer and pneumonia.
But he always said he never got over the death of best pal Johnny Carson.
Posted by james bawden at 10:22 PM