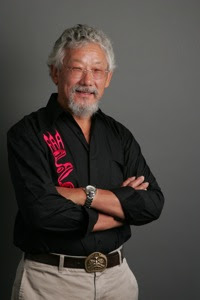 Now it's time to saute what may be CBC's best ever TV series. I'm talking about the award winning The Nature Of Things fast approaching its 50th TV season.
Why CBC's current management choses to bury this fine show on the least watched night of the week and in a summer berth beats me.
After all there are any number of poor reality shows and inane situation comedies CBC could shunt aside to make way for the best and the brightest.
And nothing better personifies the spirit of public television than David Suzuki the long time host who is one of Canadian TV's reigning super stars.
A long time ago when CBC had the funding and the spirit necessary to make world class shows the Corp actually had two similar but competing series in This Land and The Nature Of Things.
It was the genius of executive producer Jim Murray to see that only one could survive in the long haul.
He told me he wanted to personalize TBOT by making host Suzuki front and center in all episodes, Canadian viewers trusted the man and after Suzuki's weekly introduction Murray bet me they'd stick around week after week.
Well, the wonderful This Land was the one to go. And with Suzuki as anchor TNOT keeps rolling along.
Tonight there's an entire hour on lawns. It's part social history, part ecological study.
To understand the importance of lawns in North American history we're shown George Washington's lawn and how he imported European experts to produce it.
We're also taken to Levittown on Long Island to see how important lawns were to returning American soldiers after World War II: lawns became an integral part of the American dream.
The desire for the perfect lawn also spawned DDT and other deadly pesticides which brought cancer and related illnesses to the suburbs.
And we visit a grass farm where all the forms of lawn grass are grown as sod to be sold to customers intent on buying a new suburban home.
It's an excellent, exciting hour filled with science lessons plus a bit of contemporary history --we even learn how the modern lawn mower was invented. And all wrapped up with Suzuki's commentary.
In short it's an hour of quality public TV, the kind of program CBC must have on its schedule every night of the week if it wants to survive in today's crowded TV universe.
THE NATURE OF THINGS IS ON SATURDAY JUNE 13 AT 7 PM ON CBC-TV.
Posted by james bawden at 2:38 PM