Do you Remember Walter Ctonkite? 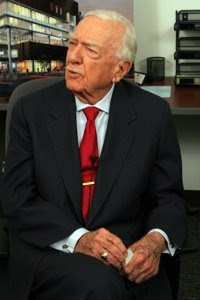 The other day I was trying to explain to a bunch of young journalism students how powerful Walter Cronkite was in the 1860s and 1970s.
They barely knew the name which is OK. TV news reporting is an ephemerial occupation and Conkite has been gone from his CBS post as chief anchor for 27 uears , a lifetime in TV terms.
Cronkite's name came up because of persistent reports from CBS that at 92 he is severely ill. The network has been preparing tributes to run at his death, always an ominous sign.
How could I explain to these kids that day in November, 1963, when I was writing a Grtade 12 Latin exam at Riverdale Collegiate and heard the buzz: President John F. Kennedy had been assassinated in Dallas, Texas.
I rushed home and turned on CBS's Buffalo affiliate, Channel 4 and sat for hours watching the live coverage.
Remember that was a time before satellite transmission. Cronkite had to piece the story for us without any of the requisite visuals. He was reduced to reading copy ripped off the AP news wire.
But I well remember the moment when with his voice breaking he announced the death of the young president.
There were those indelible images later on: the widow stepping out of the plane in Washington with the blood staining her pink suit, the little boy saluting his father's casket--but it was Cronkite's voice we heard all through those days.
The fact is I instinctively turned to CBS in those days. I'd probably turn on CNN oday rather than CBS or CBC.
So strong was Cronkite's presence that his 6:30 p.m. CBS newcast from Buffalo attracted up to 100,000 Toronto viewers every night.
We watched "Uncle Walter" through the conventions. We sat upright the night he said that the war in Viet Nam was not winnable. And I'm not taking anything away from ABC's Howard K. Smith or NBC's David Brinley by saying Cronkite was always the man.
The decision to retire at 65 proved to be the wrong one: the CBS suits maneuvered him out of a proposed role as an on air elder statesman. They cancelled his Science TV series. When we saw Cronkite it was as host of the Kennedy Center Honours or at the Vienna Philharmonic.
But after 8/11 Cronkite was the one David Letterman had to have on to explain it all.
And Cronkite's mutterings on CNN's Larry King produced rich samples of his wit and wisdom.
Cronkite flourished in TV's 10-channel universe. These days network newscasts are losing viewers and there's nobody around with thar aura of experience that steadied our nerves during so many political crises.
Posted by james bawden at 10:22 PM