Is TV Becoming A Drag? 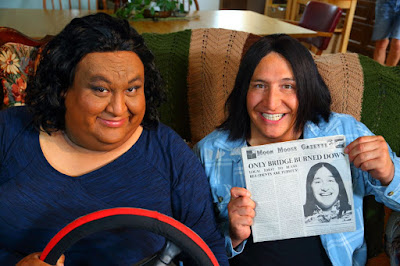 Is it just me or has TV become a drag?
No, I'm perfectly serious about this after sampling the new series Delmer & Marta.
I mean every week I'm watching Mrs. Brown's Boys (starring Brendan O'Connor) on BBC Canada.
And there's Dame Edna from times back who keeps making farewell tours.
And now it's APTN's Delmer & Marta which premieres Wednesday night at 10 p.m.
Forty-three year old Howie Miller is quite a scream as an indigenous woman named Marta (his co-star Sheldon Eter is Delmer).
So I've been previewing the show with the clips seen on You Tube as part of a series called Delmer & Marta Do The West.
At first it was a struggle. I guess I just didn't get it.
Then it hit me --I was watching the Two Stooges.
In the first clip they visited Vulcan, Alberta, where there's a Star Trek museum including artifacts from the show.
The segment was watchable and the humor obvious.
Far better was a visit to a meat processing plant in Mundane, Alberta.
There's a gigantic faux sausage out front but Marta was told not to caress it as "You don't know where the sausage has been.
And there was a look at the 3,000 rings of sausage being processed every day .Look, I could call the episode a load of baloney and that's the level of humor.
I was starting to warm to the concept.
Then they went to Elk Island National Park and I discovered the differences between buffalo and bison.
"You can tell the age of a bison by its poop," the guide tells us.
And about then I collapsed in laughter. Hey, this was fun.
Next up was a visit to the official town grouch in Evansburg, Alberta.
It's a yearly job voted on by the town seniors and the woman filling the job currently is very grouchy indeed.
She even lives at --get this 10 Frowning Street. But she has a beef against these two guys.
"You make me laugh" is her charge.
And finally I went into a 1903 coal mine with the duo and a guide and this was the best of all.
I learned about all the hazards of coal mining and how so many miners perished over the decades.
And this was the best of all.
So I guess I'm getting used to Delmer and Marta whose humor is never over the top.
And I want to watch some of their first series Caution: May Contain Nuts.
In the new series Delmer and Marta move to Morningsiode where Marta gets a gig as host of a morning TV show.
Kevin McDonald from Kids In The Hall is the boss and his old pal Dave Foley is scheduled to make a cameo later on.
So after watching all those episodes of Mrs. Brown's Boys I'm full prepared for Delmer & Marta.
DELMER & MARTA PREMIERES ON APTN WEDNESDAY AT 10 P.M. ON APTN.