I remember young cousins of mine were all over the books about Bruno & Boots adventures at Macdonald Hall not so many years ago.
And now Bruno & Boots: Go Jump In The Pool has been effortlessly translated to TV and I watched it all so it must be OK for adults my age to enjoy as well.
It premieres on YTV Friday April 1 at 7:30 p.m. Got that?
The adventures were filmed in Toronto with a strong Canadian cast. I'm still trying to figure out the high schools which were used.
My first reaction: more please.
I was lucky to talk on the phone with the author Gordon Korman who said he wrote the first novel vwhen he was just 15.
The result is so well put together I tried to nudge him into saying it might just spawn a TV series of adventures. Finally, he confessed that was just possible.
It wouldn't be the first time a Toronto production aimed at the youngher set had success.
Of course I'm thinking of the Anne Of Green Gable books which led to the vastly popular series The Road To Avonlea.
Anpother successful title I'm thinking of is The Prodigious Hickey  (1986) filmed in T.O. with Edward Herrmann and Zach Galligan.
Here it's the challenge of adapting a 100-page children's book so for TV purposes characters move at a must faster clip.
I asked a friend who grew up on these stories and she says the books are enjoying something of a comeback because of the fine writing.
Korman wrote five more books before graduating from high school which just astonishes me.
'The setting is the boarding school: MacDonald Hall and there is the inevitable stern headmaster
named Mr. Sturfgeon as in "fish".
A cousin of mine who read them as a kid says she's not so sure about  recent attempts to insert techno advances that obviously would not have been in the original books.
Bruno Walton is played by Jonny Gray ( Max & Shred) and Mel "Boots" O'Neal is played by Callan Porter (Stratford Festival) and both are well cast and very personable.
I spied a great number of talented Canadians in the large cast.
I first interviewed Jayne Eastwood when she was making her movie debut in Goin' Down The Road way back in 1971.
Scott Thompson I';ve been covering since his Kids In The Hall days.
Peter Keleghan I first met on the set of CHCH's Comedy Mill in 1987.
Caroline Rhea is especially funny as Headmistress Eugenia Scrimnage --a girls' school is conveniently across the street.
Adam Barken (Killjoys) wrote the fast moving script which successfully captures the atmosphere of the books.
Vivieno Caldinelli (This Hour Has 22 Minutes) gets a lot out of the predominantly youthful cast.
Anthony Leo and Andrew Rosen produced it for Aircraft Pictures.
It's been quite a drought on Canadian TV in terms of homegrown fictional stories so here's hoping Bruno & Boots is the beginning of a new trend.
BRUNO & BOOTS: GO JUMP IN THE POOL PREMIERES ON YTV APRIL 1 AT 7:30 P.M.
MY RATING: ***1/2 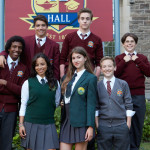 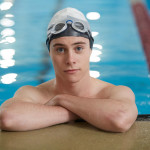