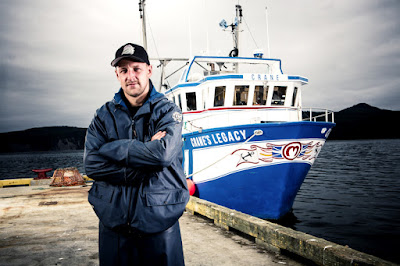 I had a delightful telephone chat with skipper Rick Crane one of six captains to star in the series Cold Water Cowboys.
The third season has just started on Discovery running Tuesdays at 8 p.m.
I've been watching since the debut and so have my English cousins  who love all these Canadian reality outings like Ice Truckers.
I should note they catch it on Portugal TV at their seasonal cottage.
The characters are all amazing and I like their matter of fact attitude even when trapped in a fierce storm.
And unlike most Canadian shows there's no need to disguise the location --this is as Canadian a show as one can get.
The hit series is a testimonial to the late reality film maker John Driftmier who was killed in ac accident in Kenya while filming another series Dangerous Flights.
His partner Tyson Hepburn has kept going and delivered a series that shows us how intricate and indeed dangerous deep sea fishing can become.
Discovery says the show has been sold to 51 other countries from Angola to Portugal to Estonia to Montenegro and Turkey.
Crane is a fascinating star of reality TV.
He's a born and bred Newfie who worked in the Alberta oil fields until giving it all up to return home to Cox's Cove and spending $200,000 for a new boat and all the trappings.
"I know all the other captains," he tells me. "And I respect them. We're all in the same boat so to speak. And when one does well we all cheer."
Crane fishes within the 200 mile limit reserved for Canadian boats. He rarely sees foreign vessels he says although he knows they are farther out.
And he went through the different seasons when he tries to fish for different species.
"It's my living --the danger part doesn't bother me."
Nothing in each episode is made up --there's only a rough plot outline/ Usually there are only two team members aboard each ship and both carry cameras.
It makes for very cramped quarters and during one storm scene I watched I wasn't sure the crew would get out alive.
The camera crews had to take water safety lessons and wore life jackets at all times.
Cameras have to be specially wrapped to withstand the waves --and salt water erosion.
I think the appeal of the show is that very strangeness and the threat at any time that nothing will be caught .
As Crane admits "We never know in advance. Some days it's richness of a catch, other times virtually nothing."
Hovering over every scene is the sheer awfulness of the collapse of the cod fishery in 1992.
Crane admits cod is still endangered but is hoping for an eventual comeback.
Meanwhile herring seem as plentiful as ever.
Crane laughs at the suggestion he's becoming one of the top reality Canadian stars around.
"It is a tough way to make a living. But I love it, I'm doing what I've always wanted to do."
The executive producer is cagey veteran David Paperny who has also given us Timber Kings and Yukon Gold.
Says Rick: "The title in Europe is Cold Water Hp;d/ I like Cold Water Cowboys better."
COLD WATER COWBOYS RUNS ON DISCOVERY CANADA TUESDAYS AT 8 P.M.