Book Of Negroes: A CBC-TV Event 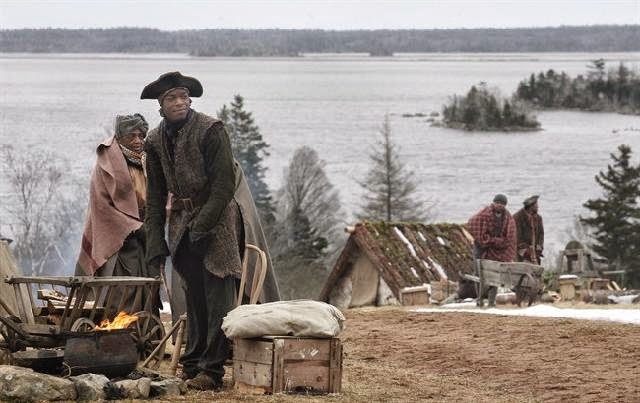 So far this has been a terrible TV season for Canadian scripted drama.
Each year as more foreign cable networks get licensed the number of Canadian dramas gets a bit smaller.
This year mighty Rogers seems to have all but abandoned any commitment to scripted Canadian stories with its huge ratings roar of weekends plugged with prime time NHL games.
I've been subsisting on such worthwhile CTV Canadian dramas as Saving Hope which offer proof positive cagey veteran Wendy Crewson can steal any scenes she's in anytime she wants to.
And then along comes CBC's must-watch new miniseries The Book Of Negroes.
It's the kind of quality fare Canadian TV should be offering every week.
In fact I once suggested a CBC version of Masterpiece Theater to dramatize the great Canadian novelists we never see on TV.
Lawrence Hill's sprawling saga of kidnapped child slave Aminata Diallo has been turned into a spectacular six-hour CBC-TV event that is virtually a must see.
In fact it plays as a sort of female take on Roots --instead of Kunta Kinte we have Aminata who is stolen from her loving parents in Guinea, west Africa, abducted onto a stench filled slave ship and sold for a pittance to a lecherous slave owner.
Hill adapted his 2007 novel with director Clement Virgo and locations included  South Africa and Nova Scotia.
And before detractors say "But we never had slavery in Canada so what part of the story is Canadian?" --well,  you'll just have to wait and see the unfolding narrative.
Because Diallo must meander all through the American Revolution in New York state before boarding a ship for an isolated refugee camp in Nova Scotia.
Wait a minute! There were black Loyalists who the British transported from revolutionary America to Nova Scotia as the price for their freedom.
I studied Canadian history and I barely knew of the story --here it is told completely and compellingly.
The Book Of Negroes is an actual 150-page ledger documenting the thousands of former black slaves who were granted their freedom by the British government and a promise of safe transportation to Nova Scotia.
Yes, it is an American narrative at first but one that later bleeds into Canada.
It opens brilliantly in London as aged Aminata Diallo (played compellingly by Aunjanue Ellis) narrates her story of being captured as a child in Africa, transported across the great river and landing on a South Carolina plantation.
We think of slavery as something foreign to the Canadian psyche.
Think again --the transported blacks face platoons of Loyalists some of whom had come to Nova Scotia with their own slaves .
And the drama also looks at the plights of the blacks who sold other blacks into slavery --here it includes Aminata's prospective husband Chekura Tiano.
I've been covering director Virgo since he was a window designer for Harry Rosen and watching him climb mightily into the designation as one of Canadian TV's finest film makers.
He now has the experience and maturity to turn BON into a real TV event, chock full of memorable scenes and with great performances along the way.
But this is the kind of spectacular home grown TV Canadians deserve every week and not merely as a once yearly TV event.
We can only hope BON is the first step in a New Deal for Canadian TV viewers..
THE BOOK OF NEGROES PREMIERES ON CBC-TV WEDNESDAY JANUARY 7 : AT 9 P.M.
MY RATING: ****.