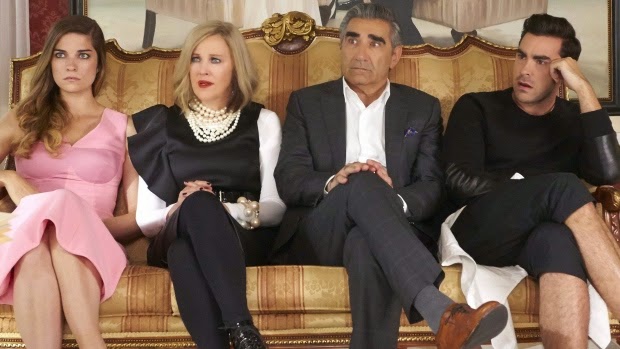 I wasn't even sure I wanted to watch the previews of Schitt's Creek which CBC sent my way.
I mean the title is terribly off putting but eventually curiosity got the better of this TV critic and I watched three episodes one after the other, barely pausing for a cup of tea.
And you know what?
At times this sitcom starring Eugene and Dan Levy and Catherine O'Hara is funny and crazy as hell.
Quirky is the word that I kept popping off in my head.
Yes, it is daring but so was Twitch City which CBC ran for two years and never really understood.
I'm hoping that with Schitt's Creek CBC's new bunch of programmers realize they have a potential hit that needs careful handling and promoting.
It could mark one giant step for Canadian TV which is stuck these days in the ratings doldrums.
You chose for yourself: Episode One premieres Tuesday January 13 at 9 p.m.
CBC used to be in the niche marketing business with Ken Finkleman's  comedic outbursts including multiple seasons of The Newsroom.
I'm sure a lot of the older audience who cling to CBC are going to be pretty perplexed by Schitt's Creek.
Best thing about this "schittcom" is its lack of a laugh track and the fact the cast are playing for characterization ahead of the next anticipated laugh.
After all Levy and O'Hara both come from SCTV and they know what's funny and what isn't.
Not having to strain for every laugh gives this show a wonderfully bent nature --photographed on actual locations is another big plus.
Dan who was one of the stars of the completely silly and hilarious After Show understood all that as co-creator with dad Eugene who I first met on the set of that great TV flick Frontier Rabbi.
Levy Senior plays a disgustingly rich video-store millionaire whose empire has collapsed --in the first scene we watch as the family's mansion and treasures are all repossessed for the creditors.,
Then he's told that leaves him with only one assett: a dirt poor town he once bought because he thought the title was somehow funny.
And so the foursome depart for the decrepit motel at oddly named Schitt's Creek.
O'Hara brilliantly plays the increasingly wacky former TV soap star who is addicted to this and that as she seeps further away from reality.
Dan Levy plays the narcissistic son David whose only concern is getting his next airmailed batch of under-the-eyes cream.
And there's the flighty daughter Alexis (Annie Murphy) who is not sure she can exist in a dingy motel without her accoutrements --she continues to text friends who no longer want to be associated with her.
Each episode looks at very simple experiences that plague this family.
At one point David tries to be a bag boy at the local grocery store to earn minimum scale wages so he can buy more cream.
But he's being constantly paged and finally quits in a huff.
Alexis tries to strike up a friendship with a buff stranger she thinks is the town bum because people are always giving him rotten food --but he's only advancing the cause of composting.
Eugene Levy's best scenes are with guest star Chris Elliott who has a wacky turn as the dim witted mayor who runs everything the way his great grandfather would do.
Does CBC know that Schitt's Creek needs a massive publicity campaign to "sell" viewers on the fact the people's network has the funniest new show on Canadian TV this season.
With Twitch City as a reminder here's hoping Schitt's Creek gets that big chance to succeed.
And by the way SC is so funny it has already been picked up on  U.S.  cable by Pop  the rebranded TV Guide Network.
SCHITT'S CREEK  PREMIERES ON CBC-TV TUESDAY JANUARY 13 AT 9 P.M.
MY RATING: ***1/2.