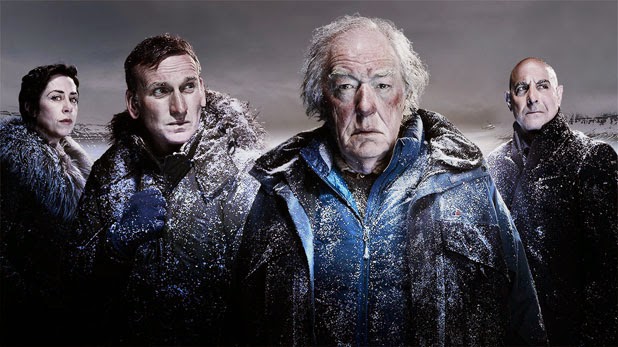 Latest bundle from British TV is Fortitude a scary thriller set in a world of perpetual darkness.
The classy miniseries revs up Thursday January 29 at 10 p.m. and stars Michael Gambon from The Singing Detective plus Stanley Tucci  of The Lovely Bones, Richard Dormer of Game Of Thrones and Danish Star Sofie Grabol plus Dr. Who's Christopher Ecclestone.
The research station of Fortitude is set high in the Arctic with a total population of 713 --outside menacing polar bears prowl and there are 3,000 of them.
One early scene has hunters off in the icy exterior being stopped by the sheriff because they have no rifles aboard.
A ravenous polar bear has just eaten one of the citizens who ventured out without a gun.
Inside the community there's a feeling of claustrophobia engendered by the constant darkness and the cramped quarters of most of the scientists and researchers.
The very setting is a character unto itself: threatening, frigid, giving the people lots of time to harbor deep thoughts and resentments.
We get introduced to the main inhabitants as the tension mounts and this feeling of unease basks every scene.
Dormer is outwardly amiable sheriff Dan Anderssen who is immediately enmeshed in a grissly new murder case.
He lacks the forensic experiences so a London detective Eugene Morton  (Stanley Tucci) flies in within 12 hours of the killing to supervise the autopsy which he thinks has ritualistic tones.
We begin to see the community through Morton's eyes--he is amazed peope can remain sane in such an atmosphere of gloom.
Created by and written by Simon Donald (Low Winter Sun) the 13-episode Fortitude was originally a co-production between Starz and Sky Atlantic that continued production after Starz pulled out.
Grabol has some fine moments as the town's beleagured mayor who is trying to jump start a new hotel enterprise for vacationers who truly wish to get away from it all.
And Gambon has moments as the aged and terminally ill wild life photographer Henry Tyson who has lived in such demanding conditions for longer than anyone else but now faces death within weeks or months.
Also co-starring are Luke Treadaway as the youngest scientist Vincent Rattrey, the head biologist Charlie Stoddart (Cristopher Eccleston),  and Jules Sutter (Jessica Raine) who is married to Frank Sutter (Nicholas Pinnock), Fortitude's chief rescue pilot.
The Guardian best described Fortitude as "Twin Peaks Set In Ice". In fact there are so many characters introduced in the first two episodes (which I've seen) that it's hard to figure out who's who.
The setting is brilliant --exteriors were shot in Iceland--but the story is, if anything, too ambitious.
There's the discovery of the remains of a mammoth carcass, a little boy who either has contracted measles or polio and may have to be flown out,a fling by Sutter that ends in tragedy..
Fortitude is nothing if not ambitious --production costs are estimated at 25 million British pounds.
Iceland was in the middle of a snow drought when filming began --so fake snow had to be imported at considerable cost.
Later on real snow was transported from mountain tops via an old Russian missile launcher.
What makes Fortitude the town unique? There are no poor people hence no welfare system, no criminals before this strange killing and women can't give birth here because there is no hospital operating room.
Let's just call Fortitude the series for what it really is: a Nordic noir.
FORTITUDE PREMIERES ON SUPER CHANNEL THURSDAY JANUARY 29 AT 10 P.M.
MY RATING: ***1/2.