19-2: Back For A Compelling second Season 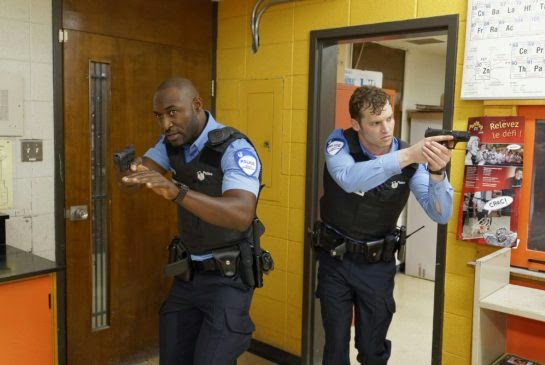 I had a bunch of friends over for dinner and asked them to serve as TV critics for the second season premiere of 19-2.
I was floored no one had even heard of the Montreal based series even after it garnered solid reviews for its first season.
"Gritty" is I think the word often used by other TV critics to describe their first impressions.
But 19-2 comes from a Quebec cop show now into its third season.
And the episode we watched is a meticulous reconstruction of a high school shooting --it ran in the first year on the French language Radio-Canada also titled 19-2.
The creator is Daniel Grou who uses the name of Podz for his work.
He directed all episodes of the original Quebec version but did not direct any of the episodes in the first season of the English language 19-2.
But he did direct the first new episode which I saw with my friends --the story was filmed in the same school as it appeared on Radio-Canada but with different characters.
Bruce M. Smith (Cracked) is the executive producer and show runner of the English version.
And it still has that bravura shot that goes on and on without any cuts for over 13 minutes.
The English 19-2 was the top rated new original series ever on Bravo and it garnered 10 nominations at the Canadian screen awards.
The story has the two Montreal cops Chartier (Jared Keeso) and Barron (Adrian Holmes) arriving at a Montreal high school during initial stages of a Columbine-style massacre by one of the students who has gone berserk.
Until very recently TV cop series were regarded as somehow :"unCanadian". One of our national myths is that we don't have a violent culture unlike our American cousins.
I remember one top CBC programmer boasting he'd only green light one cop series and that was about neighborhood police --anybody out there remember that one --it was titled Sidestreet (1975) and starred Donnelly Rhodes and Jonathan Welsh.
these days there are a number of law and order Canadian shows like Rookie Blue and Motive cleverly disguised so they can be resold to American TV networks.
This second season debut plays like a mini-TV movie. It almost all takes place in a real high school.
Kids get blown up on camera, cops freeze in dangerous situations, they have to act on impulse and people do get seriously wounded.
No motive is ever given for the actions of the baby faced killer --this one is more about how the cops who are trained for situations like this must face their inner demons.
I couldn't turn away but several ladies said they'd have nightmares for a month.
In short this is not your average cookie cutter cop show.
CBC had first dibs on an English language version but after watching the violent pilot passed on ordering a full season.
It was a good decision because 19-2 is a bale show --it is far too realistic for network audiences.
And if you cant to catch the original be advised 19-2 is back on Radio Canada for is third season starting Jan. 28.
19-2 RETURNS TO BRAVO MONDAYS AT 10 P.M.
MY RATING: ***1.2.