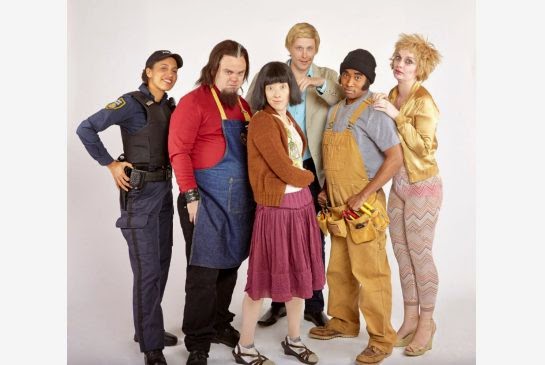 Something strange has happened to the state of Canadian TV comedy this season.
The laughs stopped coming.
Think of it --the number of brilliant Canadian sketch TV comedy shows which dominated the medium: Wayne And Shuster, SCTV, Kids In The Hall, The Frantics, RCAF, Ron James.
All expired for different reasons leaving only the venerable This Hour Has 22 Minutes to hold down the fort.
Maybe the pendulum is swinging again because a new Canadian sketch comedy series called Sunnyside premieres on City Thursday night at 8,
The good news is this one is very funny from the start.
I've seen the first two half hours and laughed out loud several times --the jokes keep coming from a talented bunch of farceurs.
"We filmed them in Winnipeg --standing in for Toronto," reports co-creator and showrunner Gary Pearson.
"I had pitched a comedy idea to Rogers and so had Dan Redican around the same time. And we just decided to join forces. I was long a favorite of Dan's going back to Puppets Who Kill. And it's been a great fix."
Pearson's solid comedy credentials include a stint on The Chumps once a CBC radio hit. Later he switched to comedy writing for MADtv and then wrote and produced for This Hour Has 22 Minutes as well as Corner Gas. Later still came The Ron James Show.
About the lack of sketch comedies on TV he says "I can't entirely figure that out. RCAF pulled in a huge number on New Year's Eve with the special. I can only say I was told by CBC they are not interested in doing that kind of comedy right now."
At Rogers "we met nothing but enthusiasm. In fact a second batch has been ordered and we're not on air yet."
As Pearson saw it he wanted to get out of the studio and into actual locations.  Originally he was thinking of a weird comedy set in a coffee shop. As for the title Sunnyside, well, some of us out there still remember when Sunnyside was Toronto's yearlong amusement park in the west end.
Shooting on location instead of inside a studio is more time consuming and costly.
"You need performers who know what they're doing --without a studio audience to guide them along."
Pearson chose a cast of accomplished comics headed by Kathleen Phillips (Dan For mayor) and Pat Thornton (Satisfaction).
"We wanted story lines to be centered in a neighborhood like Toronto's Parkdale where rich mingle with poor. So, yes Winnipeg is standing in for Toronto for cost reasons.
"Pat and Kathleen are seasoned at this type of comedy more so than the others, they led the way. We'll have recurring characters as well as introduce others along the way."
And then there's the talking manhole --voiced by none other than SNL's Norm Macdonald.
Says Pearson : "It feels like a sitcom in a way but that's also how it was shot. Dan and I have worked well together, we compliment each other. He was very familiar with what I had done. We have very similar comedy sensibilities."
Pearson says working with Rogers has been a plus. "We said we have an episode coming up where there is an infestation of little ponies in the neighbhourhood. Not rats, ponies. And after some hesitation we were told if we think that can be funny, well, go ahead with it."
Pearson says of the episodes "It's all very Canadian. And the Winnipeg crews are great, I asked Mark McKinney who shoots there a lot for a list and he gave us names of seasoned veterans to work with."
Other actors featured include Alice Moran, Kevin Vidal, Rob Norman, Patrice Goodman..
If given time to grow an audience (CTV's Big Bang Theory is the opposition)  Sunnyside could fill that big black hole in Canadian TV comedy.
SUNNYSIDE PREMIERES ON CITY THURSDAY JANUARY 8 AT 8 P.M.
MY RATING: *** 1/2.