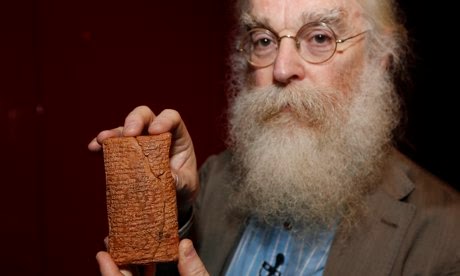 I positively loathe Christmas as celebrated on TV.
Every December the networks trot out those 40-year old animated specials featuring the voices of such dear and departed stars as Jimmy Durante and Burl Ives.
The same TV movies roll every season and the same old movies.
And then along comes something as sprightly as Secrets Of Noah's Ark. It premieres on History Saturday December 13 at 9 p.m.
OK, I know it's a very long stretch to say this is a holiday special.
But it is in a strange way as it celebrates one of the enduring stories of the Bible: Noah and the flood.
Made by Canada's yap films and Britain's Blink Films, this co-production stars a 3,700 year old clay tablet a British soldier bought in Iraq during World War II duty.
He kept it literally under wraps until son Douglas Simmons  brought it one day to the British Museum as a donation in the name of his late father.
There was only one expert at the Museum who could read the inscriptions --Dr. Irving Finkel, and he emerges as the exhuberantly wonderful hero of this documentary Secrets Of Noah's Ark.
With his white flowing beard and look of amazement Finkel could pass for a biblical prophet come back to life any day of the week.
This scholar was made for TV stardom. He's all giggles when given big scale 3-D glasses.
I gulped when he told how refugees from Israel were skinned alive by their Babylonian captors.
He tells us he immediately recognized the clay tablet as telling the story of the flood but from the Babylonian perspective.
This story predates the Biblical one but is presumably the same flood only with other characters.
One part of the tablet gives the precise measurements for building the ark which would have measured 65 meters in length.
I don't think the Bible got into measurements, am I right?
And so off viewers are taken on a merry race from the British Museum to desert landscapes where we can still spot traces of ancient floods to excavated Babylonian sites and even to India.
There's a fascinating group of experts who weigh in on the mystery with Finkel as our irrepressible guide tho thinks this cuneiform must have been composed hundreds of years before Noah's adventure was written down.
And Finkel figures when the Jews were transported to Babylon for their anguished captivity a lot of the sophisticated Babylonian culture must have been absorbed by them into their own traditions and writings.
Then we're off to India where the building of such boats still exists --the tradition has died out in Iraq.
Surprise One: discovering the boat was round and not exactly an ark in any shape.
I mean it could float but not go any where in particular.
That detail goes unresolved as does the either-or question: was Noah's Ark real or mythic?
Floating around in a round boat made of bullrushes can't have been humanity's way of escaping that flood, right?
Secrets Of Noah's Ark is fun right up to the unresolved ending (Nic Young wrote and produced it with yap films' Elliot Halpern as co-executive producer).
SECRETS OF NOAH's ARK PREMIERES SATURDAY DECEMBER 13 AT 9 P.M.
ON HISTORY.
MY RATING: ****.