Bryan Baeumler Has Yet Another TV Renovation Show 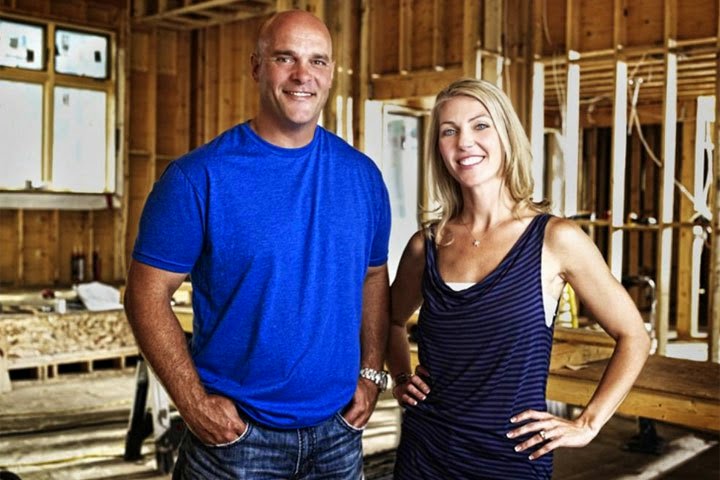 A recent but long sickness left me spending my afternoons catching up on all those TV fix-it shows that dominate the cable web schedules.
I can instantly spot the American versions because the atmosphere is hysterically "sell-sell".
The Canadian ones are ore relaxed and friendly and offer more how-to-do things tips.
I used to like Propery Virgins when it was Canadian based but the trek southward has brought a real frenzy to the attempts to get first time property owners to buy anything anytime.
For humor I'll watch Love It Or List It which has two versions one from T.O. and one from Vancouver.
I was having tea with a friend recently when the fabulous female contractor Hillary Farr walked by the coffee shop and he almost swooned --she's both lovely and completely knowledgeable.
Some of the Canadian TV vets seem to have a new season every season.
There's Scott McGillivray whom I've interviewed up close and personal.
People are always insisting to me he wears a wig!
Not So I can report --he just has a low brow line.
And then there's reno master Bryan Baeumler who has yet another new series House Of Bryan: In The Sticks which follows the guy and his drop dead gorgeous wife as they sell their old house and renovate a new one.
Let's see how many Baeumler series I can recall.
First there was Disaster DIY and then the inevitable Cottage Edition, Leave It To Bryan which everybody watched, the Canada's Handyman Challenge things.
And looking up his credentials I see he has his B.A. from University of Western Ontario in of all things Political Science.
Maybe that's what makes him appear to be such a laid back kind of guy --I've never seen him get angry at least when the cameras are turning.
I watched the first new episode of House Of Bryan but I couldn't really figure why the couple are moving again --the wife is pregnant but they'll soon have four children which means they need more bedrooms.
The house they fixate on seems more like a great big cottage than a suburban dwelling. And it only seems to have a bedroom or two.
But the renovation realities are endless and in a 16-episode series one must have enough projects or there will be nothing to argue about and film.
The "new" house seems like one big block of cedar --and the location is way, way out there. Bryan says he grew up on a farm and wants the same experience for his growing family.
I'm guessing he picked this one because it has good bones. The wife is properly skeptical --the last was a bungalow.
So we see them packing for the move --she says she's dad because it was supposed to be a forever home.
I always thought Bryan told us to stay away until a reno is complete.
But the entire family moves in as the construction goes on --maybe it makes for better TV.
The resulting comedy/drama made me think of that old Cary Grant flick Mr. Blandings Builds His Dream House.
And that mixture of home tips and the personal story makes House Of Bryan pretty watchable --until the next time when they decide to move back to the city and make another series out of that.
HOUSE OF BRYAN:  IN THE STICKS PREMIERES SUNDAY DECEMBER 14 AT 9 P.M. ON HGTV.
MY RATING: ***.