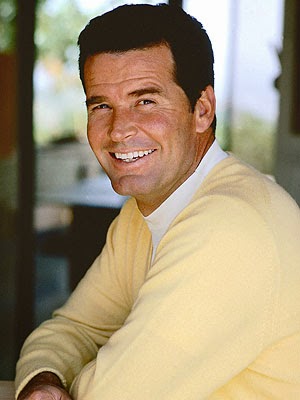 I lost a whole heck of famous friends and acquaintances this past year.
Of all the celebrity deaths of 2014 I was most affected by the passing of Jim Garner.
Maybe that's because I found him the most honest and down to earth of the TV stars I ever interviewed.
We ate stale ham sandwiches in his trailer one day in 1977 when he was at the height of his star power on TV's The Rockford Files.
His producer Meta Rosenberg was also present --later in a dispute over finances Garner would forever cease talking to her.
That's the kind of upfront guy he was.
With Robin Williams I'm totally surprised he lasted as long as he did.
I met him first on the set of Happy Days in 1971 when he was as high as a kite.
Later interviews would find him troubled and sad, never very funny, but increasingly preoccupied by life's ironies.
I only met Max Schell once in passing when he was promoting an awful Peter The Great TV Miniseries.
He later made a memorable documentary about his sister Maria's descent into madness --I've never quite gotten over seeing it.
Martha Hyer once welcomed me to her lavish Rancho Mirage mansion which she shared with great producer Hal Wallis (Casablanca).
There was a rueful quality about the talented blonde actress who was forever typed as a second string Grace Kelly.
Mickey Rooney was just a handful in his late 70s as he embarked on a dinner theater engagement in Mississauga, a far cry from his heyday as America's most popular movie actor.
Harold Ramis I met just once on the set of his SCTV series --he only played on that series for a season. I always wondered why he quite so soon. I guess movies beckoned.
Polly Bergen was in T.O. to promote her cosmetics made from turtle ingredients.
I always thought she was a better actress than huckster. Anyone else out there remember The Caretakers?
When I interviewed Efrem Zimbalist at CBC's Radio building on Jarvis St. he was preparing for a concert of his own compositions.
But his biggest thrill he said was meeting Glenn Gould in the corridor --it brought tears to his eyes.
I remember spending an afternoon with Joan Rivers in her Toronto suite. Also present: her 80-year old boyfriend.
In person she was bright and opinionated and we later went across the street to the Book Cellar where she bought an armful of books she said she'd devour before leaving the city after a weekend.
Backstage at the Ford Theater with Elaine Stritch was fun. She was co-starring as Parthy Ann in a revival of Show Boat and was in constant competition with Bobby Morse for laughs.
At a celebration of the Sid Caesar Show in L.A. I got to sit next to the great comic himself at lunch and found him contemplative and downright fussy.
Sir Donald Sinden I saw in a play at the Royal Alex--a play by Dion Boucicault --forever after I'd watch for his star turns on Masterpiece Theatre.
When I had to interview Bob Hoskins on the telephone all he wanted to talk about was the half a movie he'd made in Montreal once.
It collapsed for lack of funding and I can't even remember the title.
And talking Eli Wallach and wife Ann Jackson out to lunch in T.O. was a thrill. They were starring in a revival of The Diary Of Ann Frank.
He point blank refused to answer my questions about The Misfits (1961). "It's not a jinxed movie, after all I'm still alive."
And then there was an interview of sorts with Shirley Temple who was determined to catch the next plane out of T.O. as fast as she could.
About her autobiography she scoffed "I saved America from the Depression . Then I was washed up aged 12."

I miss them all, some more than others.
A few I was surprised even made it to 2014.