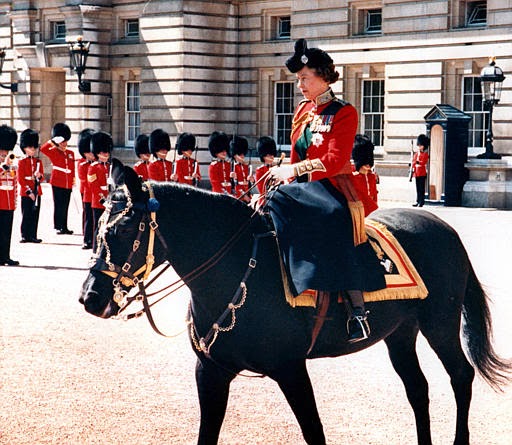 The very title Royals & Animals almost put me off this great new Canadian made documentary.
But then I saw it was made by Montreal filmmaker John Curtin so I let my horse sense make my decision and I'm happy to report I couldn't turn away.
True, there are the requisite shots of Queen Elizabeth and her snappy corgi.
But there's also a deep note of pessimism --her dogs and horses are the only ones in this sycophantic world who take her for what she is --a slightly lonely old lady who desperately needs time away from a closely observing public.
The tightly edited hour begins in silly fashion as we see the preparations that go into feeding HM's dogs --only the best and freshest chicken and steak will do and then Elizabeth adds a dash of her own mixture which is a closely guarded state secret.
The dogs are with her on most occasions-- one even travelled with her on her honeymoon with Prince Philip.
The little dogs are so collectible but heir apparent Charles will have none of them, he prefers his Jack Russell while Kate has a cocker spaniel she even goes to bed with when William is out flying his planes.
Staff universally dislike the corgis who are not house trained --their moist moments must be cleaned up with soda water and a stiff brush. Then there was Princess Anne's dog who jumped his leash in Great Windsor Park and bit an infant.
The magistrate sternly ordered anger management courses for the transgressor --any ordinary mortal might have seen his dog put down in a similar circumstance.
We learn the royal horses get equally fine treatment. One chef shows how the carrots must be washed and then sliced just so before Elizabeth pops the morsels into the horses' mouths.
The dark side of royalty? Princess Diana loathed all the animals at Balmoral Castle and tried to learn to ride but eventually gave up.
She was horrified to go out with Charles on a stag and pheasant hunt and emerge from the bushes covered in blood.
Philip may be a great conservationist but he also shoots up game with all the passion of a big game hunter.
Best part of the hour is the look at the Queen's close relationship with her mount from Regina, Burmese who she was riding the day in 1981 when a crazed man shot at her.
We see Burmese flinch but remain ever steady so confident was the queen that he would not panic.
When he died he was buried on the grounds of Windsor castle.
There are bits on British swans still technically owned by the royals --when the swans leave the Thames then the monarchy will collapse or so the legend goes.
And the royals and race horses is another saga --the kindly old Queen Mum left debts of four million pounds much of due to her compulsive gambling on horses.
Curtin uses animals as a metaphor for all that's sad and mixed up in the life of the royals, a clever and compelling device. He wrote, produced, directed and edited it for Kaos Productions (Michael Wees was cameraman).
The other three hours including After Elizabeth II and Chasing the Royals did right well in the ratings.
As will Royals & Animals: 'Til Death Do Us Part I fearlessly predict.
ROYALS & ANIMALS PREMIERES ON CBC-TV'S DOC ZONE THURSDAY OCTOBER 16 AT 9 P.M.
MY RATING: ***1/2.