Canada's Worst Driver: I Was Wrong 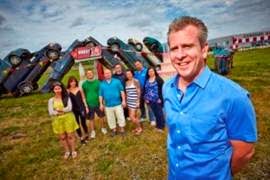 Here is where I get to confess that I once was wrong.
How often have you ever seen that confession from a TV critic?
All I can say in my defense is that it was a very long time ago.
Say 10 years.
I was then writing the daily TV column for the Toronto Star and I watched a preview of a new series on Discovery titled Canada's Worst Driver.
It was hatred at first sight.
I loathed the first episode because I misunderstood it.
I thought it was somehow extolling drivers who were dangerous both to themselves and other drivers on the road.
I couldn't have been more mistaken as a ton of readers told me at the time.
And since then yearly installments of this popular series on Discovery had been racking up record numbers.
For Season 5's Finale in 2009 the rating was over a million viewers. For a Canadian reality outing that's phenomenal.
I watched the first new episode of the 10th season and I now see the error of my ways.
The new drivers profiled here are pathetic cases. They deserve their time in Driver Rehab.
In fact some of them should never be permitted to drive again.
In the past decade the producers have received 7,000 nominations --the thought that so many incompetents are out there simply scares me.
I'm not sure why these incompetents deign to even show up. Are they that desperate for their 15 minutes of fame?
They should rightly be embarrassed but some seem simply slap happy to be captured on camera in all their glorious ineptitude.
First up there's Calgary's Chanie who takes 15 to 20 selfies while she's driving and simply ignores most traffic signs.
Sudbury's Jason is simply too blind to see signs anyways --current legislation says he doesn't have to have his eyes tested until he turns 80 which is four decades from now.
Siham has "course anxiety" problems and has been involved in a four car pileup.
Tyler from Notre Dame is so cautious he stops before green lights.
Santana, the first Newfoundlander, chatters away on his cell phone while hitting cars all over the place.
Tyler, a taxi driver from Kingston, has had two cars completely written off.
Mariah laughs loudly as she goes the wrong way and rear ended a cop car recently.
George is a road bully who watches TV shows on his phone as he drives around.
Are they kidding? No. They're all just plain awful.
I simply think Canada's Worst Driver is the scariest series on TV.
I got it all backwards when I first watched.
Andrew Younghusband who I recently interviewed for his other series Don't Drive Here is the host and producer.
In subsequent episodes we'll see how much if anything these awful drivers learn at rehab.
Just keep them away from me, please, I think this series can go on forever there are so many atrocious drivers on our roads these days.
CANADA'S WORST DRIVER RETURNS TO DISCOVERY MONDAY OCTOBER 27 AT 10 P.M.
MY RATING: ***.

Seems like you wrote this in 2 minutes to try and get the negative rant out as fast as possible as there are grammatical, typing and gender errors.

I'll do something positive as is so hard to find these days with faceless blogs, I'm going to point you to a place to get some help.