"This is it. Doyle's end. I'm sad but I'm proud --you know, all at once."
Star and creator Allan Hawco told me he'd decided to end CBC-TV's quirky hit Republic Of Doyle during the middle of last season.
Doyle not only acts in them he also writes the scripts with a paertner and supervises editing.
The last season revs up on CBC-TV Wednesday October 15 at 9 p.m. Got that?
"I thought we should end on a creative high," he said when we talked at CBC's fall junket in Toronto.
Yes, putting that much effort into a series can be tiring. And this will be Season Six after all, a huge milestone for any Canadian series.
But the wonder is CBC's new management team let him get away with it.
Fashioning a new hit TV drama series isn't done every day.
Look at the tangled history of CBC's Crack'd starring David Sutcliffe which sputtered along for two seasons despite the talent before and behind the TV cameras.
And CBC-TV has been desperate for a popular series from Newfoundland for like forever --any one else out there remember all the effort that went into the series Hatching, Matching And Dispatching.
One of the times I chatted up Gordon Pinsent he remarked he was wrong in exiting his hit CBC series A Gift to Last (1976-79).
But nobody at CBC encouraged him to stick around for a few more seasons.
In terms of Republic Of Doyle I think it would make a dandy TV movie every year or so --just like James Garner's occasional returns to The Rockford Files.
In order to make the show the provincial government had to fork out millions in subsidies but Hawco told me he's sure it will eventually be paid off.
Gradually the series is being sold abroad. It even has started popping up on Buffalo's FOX TV affiliate Channel 29.
"And there's a steady stream of tourists who see the city in all its glory and decide to come and take a look," he told me.
Don't get Hawco started on the perils of being a Canadian celebrity.
"We see so much TV from the U.S. then along comes a show about Canada and viewers really clicked. They stop me everywhere. It's very gratifying."
This year there'll be just 10 episodes --down from orders that went as high as 16.
Jake gets jailed for the murder of William Cadigan Clarke and we'll see him try to get out of that.
In other seasons such big ticket names as Russell Crowe, Pinsent and Due South's Paul Gross have made guest appearances.
Since I met up with Hawco he's been announced as the star of yet another new CBC series titled Caught based on the novel by Canadian Lisa Moore. It will be a co-production between his company Take the Shot productions teamed with eOne.
He'll play David Slaney, a convicted drug-runner who escapes from a Nova Scotia prison after five years of incarceration and is set in 1978.
Of course I wish him well just as I'm wishing for more ROD stories on TV in the near future. 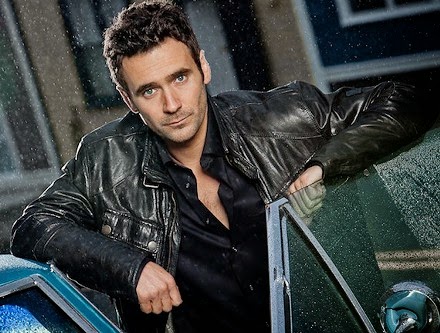