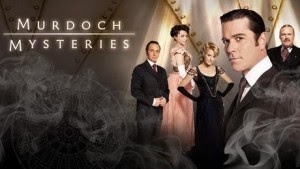 No doubt about it --Murdoch Mysteries would be battling Heartland for the coveted title of longest running CBC hour drama.
Heartland hit episode 803 on Sunday night to be followed by Murdoch Mysteries Monday night at 8.
But Murdoch's first five seasons ran on Citytv which ditched the Victorian cop drama several seasons back because the cost got too pricey.
CBC then did something it rarely if ever has done --it picked up a rival's series and has seen ratings increase every season since.
I can't think of another series that started elsewhere only to later flourish on CBC.
I well remember when Global TV floundered in 1973 and all sorts of fine new shows got cancelled.
When I asked CBC's Knowlton Nash, then head of news and current affairs, he was aghast CBC would deign to pick up series from other networks.
By contrast when CBC axed Don Messer's Jubilee in 1969 enterprising CHCH-TV picked it up for the next season.
And CHCH also picked up the CBC show Fighting Words with the late, great Nathan Cohen.
As far as star Yannick Bisson goes I've been covering him since he was a remarkably poised 17-year old on the set of the 1984 CBC TV flick Hockey Night starring Megan Follows.
On Monday's episode he not only stars but directs it with remarkable verve.
Bisson, of course, isn't TV's first Inspector William Murdoch.
Peter Outerbridge got there first in a series of TV movies shot in Winnipeg.
But Outerbridge was busy making another TV series for Shaftesbury Films --ReGenesis--when City decided to pick up the concept as a weekly series.
"We play the part completely differently," Bisson told me last time we chatted at CBC-TV's fall preview affair.
Bisson added a welcome dash of comedy and plays Murdoch with insouciant charm. Outerbridge was darker, a tortured Catholic, brooding, compelling but I'm not sure this would have worked in weekly installments.
I was on the set before the series actually debuted --there have been several location pit stops in later years --originally it was shot on studios at Eastern Avenue which no longer exist.
I'm also told there's a fair bit of shooting in neighboring Hamilton which sports more nineteenth century architecture than Toronto.
Obviously this is a very expensive series to shoot --period costumes can't be purchased off the rack, horses have to be hired, many of the accoutrements of Toronto circa 1900 have to be leased.
Tonight's episode titled Glory Days is even directed by Bisson.
It cleverly incorporates details about his upcoming wedding and contrasts the  policy of gun control already in effect in Toronto with the shoot 'em up philosophy of a Yankee carpet bagger.
The Yankee in question is none other than Bat Masterson  (nicely over played by Steven Ogg as a dare devil writer coasting on his past fame).
Bat is convinced that Butch Cassidy and the Sundance Kid are in town and planning an elaborate train robbery.
Bisson gets to direct  action scenes where he's also involved as an actor, a hard job that.
But the action swirls ad there are some pungent looks at a Toronto house of ill repute and also the color bar in the Victorian city --a black boxer is bitter about the way he's treated.
After eight seasons Murdoch Mysteries changes just enough to attract new fans while retaining its regular base of loyalists.'
EPISODE 803 OF MURDOCH MYSTERIES TITLED GLORY DAYS PREMIERES ON CBC-TV MONDAY OCTOBER 20 AT 8 P.M.
MY RATING: ***1/2.

Red Green was a CBC pick-up.

Previously aired on Global and CHCH