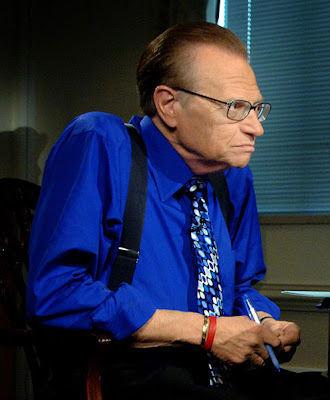 Larry King has been dominating CNN since 1985. But these days his ratings are really drooping --he's down at least 40 per cent from his glory days during the inauguration of President Obama.
And with his ongoing divorce proceedings against wife number seven King has become the fodder for some very cruel jokes by the late night comics.
So is he finished or what?
At 76 the gaunt King obviously needs rest periods.
But his big problem is technology. The younger set just aren't tuned in to CNN anymore --it's their parents' network.
They're twittering and tweeting to each other and if they watch TV it's Jon Stewart who is having a great roll covering Sarah Palin and all those Tea Party antics.
The biggies seem to have stopped coming to Larry King. I mean in his days he cornered such elusives as Barbra Streisand and Marlon Brando besides the inevitable roll call of U.S. Presidents.
Take the night of the Conan O'Brien exit from CNN. In the old days Conan would have announced all that live on King. But these days King had to rely on a panel of show biz reporters.
King's nights are spent with third rate reality "celebrities" and panels of talking heads who also make the rounds on Anderson Cooper and John King.
President Obama's sliding poll ratings with the American public aren't helping. These days the unofficial opposition to Obama is over at Fox News which rips apart the Democrats on a nightly basis.
King can survive a bit longer but his program needs refreshing and he has got to bet back the "A" list guests he used to have.
I used to make sure I caught the top of his program every night at 9 but these days I often forget to do so.
On the "other" CNN there's Joy Behar offering a humorous glance at the same topics as King. She'd be his logical successor but I'm also hearing CBS's Katie Couric and even Jon Stewart are in contention.
Larry's fighting competitiveness should keep him going and besides he needs the money for all those alimony payments.
Posted by james bawden at 10:43 PM