An Americanized Torchwood out 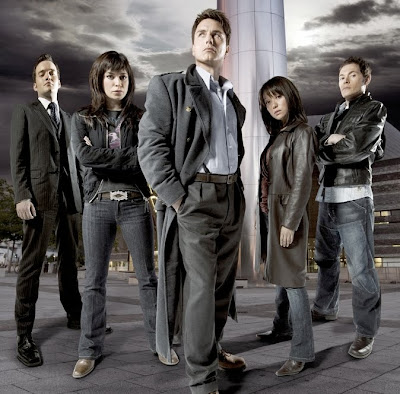 Big news of the day is the decision by Fox TV to pass on a proposed Americanized remake of Torchwood, the BBC's top rated (for sci fi anyway) spin off of Dr. Who.
Some of tou Torchwood fans out there are singing the blues while others are happy the Fopx version will never get made.
When it ran last summer, the third season --five episodes running over a single week--was a huge ratings hit both on U.S. TV and on Canada's Space TV.
Since then Russell Davies who created the show from a character he introduced on Dr. Who has left the Dr. Who camp entirely.
Now I get my information from the Hollywood Reporter but it appears Davies as well as his co-writers Jane Tranter and Julie Gardiner were in L.A. working on a proposed scenario for a 13-episode run of stories that would take place in America.
Would star John Barrowman be involved or not? It's not certain but to fans he was (and still is) Captain Jack and any replacement would be frowned on.
And how much of the curious sexuality of the story would survive the translation to American TV I'm wondering.
I spoke with Davies when he was over in T.O. for the Canadian-American version of Queer as Folk which ran for five years on Showcase and American Showtime.
But a subsequent effort by HBO for a U.S. version of his BBC hit Bob And Rose never saw the light of day.
When American TV "remakes" shows from other countries the results can be deadly.
Sure, there have been a few hits like the currently running The Office and of course decades ago All In The Family.
Anybody out there remember the pallid NBC version of Coupling? Another bomb was Life on Mars, a BBC hit that ran only 17 episodes on American TV despite the presence of Harvey Keitel.
Both CBS and Fox took turns trying for a U.S. version of the CBC hit Intelligence which never got beyond the pilot stage.
I'm hearing that Torchwood may surface elsewhere perhaps on Showtime or even STARZ (home of the new hit Spartacus) or even AMC which currently makes the best drama series on U.S. TV, Mad Men.
Posted by james bawden at 2:46 AM