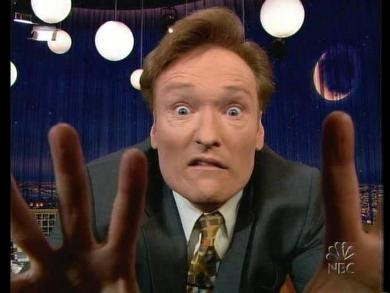 Conan O'Brien predictably is coming back to late night TV in the fall.
We all knew that didn't we?
But what's extraordinary is his destination. It's not Fox TV as was heavily predicted.
It's TBS.
In a press release Conan says "In three months I've gone from network television to Twittrer to performing live in theaters and now I'm headed to basic cable. My plan is working perfectly."
George Lopez's TBS show which runs at 11 gets moved back to midnight but Lopez says following Conan can only increase his ratings.
Apparently the deal with FOX just couldn't be cobbled together. Some network executives were caught mumbling about the costs.
O'Brien's deal calls for four new shows a week with Fridays off or in reruns compared to his five nights a week deal with NBC.
So why did Fox back out?
Ratings for all late night talk shows are down and so is revenue. And the Fox conglomerate has been battered by the boycott of its news channel by powerful sponsors upset at the antics of Glenn Beck.
One question: will a Canadian network try to local rights because not everybody up here gets TBS?
But TBS now becomes a gigantic player in the late night wars with O'Brien and Lopez who attracts a younger audience.
It looks like the late night battle will really steam up come fall.
Posted by james bawden at 1:14 PM