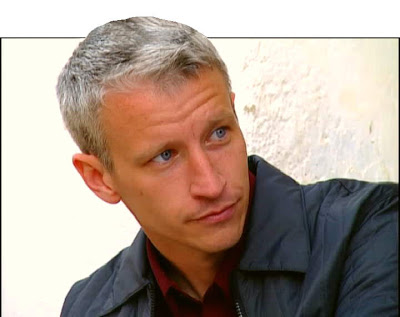 Media sites are all a-twitter over the recent ow ratings posted for CNN news shows --the ratings have fallen almost 40 per cent since the election of President Obama.
According to Newsweek the Top 13 cable newscasts are all on FOX TV (which many Canadians can not get) and Anderson Cooper is ranked 17th with a measly 746,000 American viewers a night.
So what went wrong?
When Cooper was dropped into CNN's flagship newcast at 10 p.m. (displacing the older and widser Aaron Brown) he was supposed to herald a new day in TV News.
He was bright, witty, liked to swin with sharks and presumably could better attract the younger viewers CNN was after.
And during the 2008 election campaign it all seemed to be working for CNN as ratings surged.
Now it's a whole new environment and the U.S. public's love affair with Barack Obama seems over.
After a long, bruising fight over health care the young president is posting low approval ratings comparable to President Bush's first term presidency.
News is supposed to be free of ideological slanting. right? Anyway that's why I watched Walter Cronkite on CBS for so many years. Cronkite told it as it was and when he said it was time for the U.S. to wind up the Vietnam war, President Johnson certainly listened.
But the CNN news shows are in danger of becoming pep rallies for Obamaism.
We see the same talking heads on Cooper every night and they give us the party line and soon it becomes downright boring.
Cooper's predecessors including John King and Campbell Brown weight in with the same slant on the same stories.
The 24/7 news cycle has made a mess out of traditional TV journalism,. It's time to reinvent the model for what TV journalism could and should be.
lips, the same stories, the same perspective. By the time Cooper gets into the act the news has become stale and predictable.
Meanwhike the yahoos at FOX are scoring big points. Everybody wants to listen in to Glenn Beck precisely because he's such an adorable loon.
CNN made a bad mistake in dumping Lou Dobbs at 7 because he was too opinionated.
Another thing --live coverage of the disaster in Haiti did not play well in an America beset with unemployment and a nasty recession. americans do not take kindly to foreign news unless it directly affects them.
And there's a problem with octogenarian Larry King who seems extremely disinterested many nights. He's even being out rated by fellow CNNer Joy Behar who could be jousting for his spot, who knows?