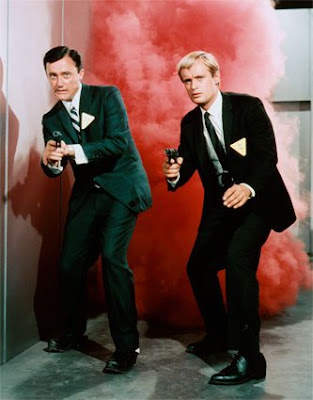 Check out the amazing article in AdWeek that sums up the current plight of Friday night shows.
Once Friday nights was among the most watched TV nights of the week.
As a kid in the Fifties I'd hunker down for an evening of TV.
Let's see now what shows were my favorites?
I remember 77 Sunset Strip, Desilu Playhouse, Twilight Zone, Schlitz Playhouse, The Detectives to name a few.
Years later the titles changed to The Man From U.N.C.L.E, Star Trek, THe Name Of The Game, Rockford Files.
And today?
Families go out grpcery shopping on Fridays and kids go to the movies. That leaves seniors as the most likely to be watching TV Friday nights.
The AdWeek piece suggests Friday is the new Saturday meaning only poorly rated shows are left. Saturdays is now filled with reruns from other nights.
Adweek says CSI was the last big network show to flourish on Fridays and it has been changed to Thursdays.
When Smallville was moved to Fridays it lost a huge chunk of its audience.
As ratings seep away so do advertisers. And even the public seems to have given up on Fridays as an entertainment source.
NBC runs the low rated but critically appreciated Friday Night Lights while ABC has 20/20 one of its least expensive shows.
So let's see what the U.S. networks are planning for the fall. So far the rafter of new pilots seem designed for other nights than Fridays.
Posted by james bawden at 2:57 PM

Friday is a dead zone for TV these days. I don't know what happened. Remember T.G.I.F back in the 80's and 90's? A whole bunch of shows were popular on Friday.