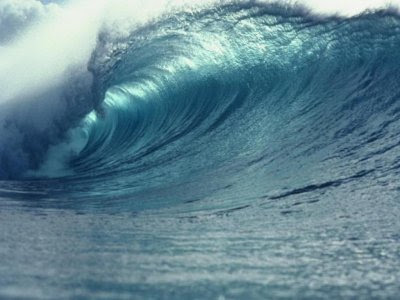 "You are always writing about Nature Of Things," writers "Constant Reader". "How come?"
Dear Constant Reader: Because it's a great series that deserves some promotion. It certainly doesn't fit in with CBC-TV's current preoccupation with being hip and trendy --just look at what they've done with The National.
But Thursday night on NOT there's the start of a four part miniseries called One Ocean that's virtually a must see for us documentaryphiles.
Ambitious! Yes, it was shot all over the globe by Merit Motion Pictures and Tactica Interactive Communications in association with CBC, National Geographic and Discovery US.
The premise is simple --we seem to know more about space exploration than we do about our oceans which keep us alive and thriving.
The first hour is an outstanding look at how the oceans formed some four billion years ago and how the first creatures evolved in water only to late climb out onto land.
We get to view remnants of ancient animals that somehow survived the four or five mass destructions of life that have so far happened on our planet.
All I can say is watch and learn and while doing so be aware it's programs like this that justify CBC's existence.
Then stay tuned to the other side of CBC, the desire to be with it.
Another new CBC miniseries, this one a six parter called Love, Hate & Propaganda, debuts. It's designed to teach the younger generation all about World War II.
The fact that teems and twentysomethings know nothing about their grandfathers' war deeply disturbs me. But I don't think this version will do anything for them.
It certainly did nothing for me.
The premise is deeply flawed, that itch to make history personally relevant in some kind of pop style. As history it's bunk, as entertainment this is superficial. Include me out.
George Stromboulopoulos is the "host" --past TV histories used Walter Cronite and Laurence Olivier.
I dutifully sat through the first episode called "The Strongmen" which mistakenly personalizes and trivalizes the conflict as a power grab by the likes of Hitler, Stalin, Mussolini and Hirohito.
I'm not saying anything in it is factually wrong but it is lopsided. Deep down it's superficial and I can't see the kids CBC so desperately wants to watch actually tuning in.
Or as Strombo says at one point "This man will become one of the biggest players in the war."
Players? Hey, dude, much, much more than that!
THE NATURE OF THINGS: ONE OCEAN PREMIERES ON CBC-TV THURSDAY MARCH 4 AT 8 P.M.
MY RATING:****
LOVE, HATE AND PROPAGANDA PREMIERES ON CBC-TV THURSDAY MARCH 4 AT 9 P.M.
MY RATING: **.
Posted by james bawden at 1:02 AM

Granted George may not have been the best choice for host, but he is liked by the next generation of Canadians. I think the overall idea of the show is important. While talking to a 17 year old about the Second World War he asked me "That's the one with Stalin,right?" He didn't know much after that fact either. When I watched the first episode I tried to keep in mind the target audience, and while I did find some of the terms a little weird, as in Hitler as a "player", I kept reminding myself...I'm not a teenager anymore. I'm going to watch the complete series before I make any real judgements on the doc.