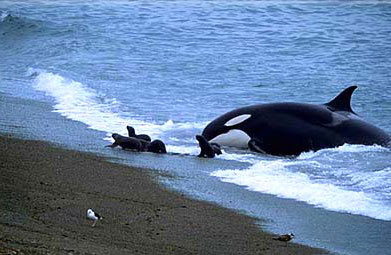 The special Killer Whales is perfectly programmed to answer questions about the seas' most deadly killer. After the tragic death of an experienced trainer killed at Orlando's SeaWorld, this hour tells us what to expect.
The theme is a salute to the deadliest and largest killer of the oceans. But the "killer whale" or orca is actually one of the smartest mammals out there.
And in some amazing footage we see the orca ability to act as a team in hunting down and catching prey.
First up is a long segment shot off Patagonia, Argentina, where we watch a family of killer whales who visit every year just to catch sea lion pups.
To do so means fancy maneuvering in very shallow water and the ability to jerk around after the kill on the sand beaches and get back into deep water.
Be warned: this is one of the bloodiest scenes ever shown and it's all for real.
We also see killer whales hunting down their cousins dolphins who are faster and more agile. But the orcas pool their resources to try to outlast the dolphins and leave their prey too fatigued to offer much resistance.
The third segment from New Zealand is truly astonishing as the orcas attempt to feed on sting rays in shallow coves. They have managed a trick of getting the rays without receiving a deadly sting and they manage to pass this knowledge on to other orcas.
Beautifully shot and edted by Joey Allen and Kevin Bachar for Pangolin Pictures , this one should be on your "must watch" list for this week.
KILLER WHALES premieres on Thursd. March 11 at 9 p.m. on Discovery Channel.
My Rating: ***1/2.
Posted by james bawden at 12:53 AM