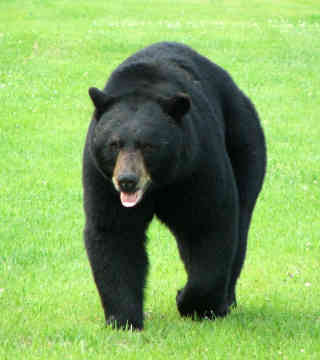 Grrrrr! It's Bear Week on Animal Planet. What more could you want to keep the kids entertained and educated during March break?.
First up is I'm Alive which is my least favorite among the four hour programs I sampled.
The program looks at survivors of wild animal attacks and says the statistics report 100,000 people worldwide mauled and killed each year.
Tonight's episode looks at a two-year-old toddler who got snatched by a bear but quick action by his mom saved him.
Anticipating the attack makes for a tension-filled hour. I admit I was trembling as that moment approached. Since there were no cameras there during the actual incident the whiole episode has been dramatically recreated in excruciatingly slow tempo. I just wanted this one to be over (Sunday, March 14 at 9 p.m. on ANIMAL PLANET).
But hold on! I really liked the second hour so much better. Titled Strangers Among Bears it salutes Charlie Vandergaw who has been living among bears every summer at his Alaskan retreat. Of course they come to see Charlie --he feeds them doggie biscuits and plays with them.
Things get sticky when British photographer John Terry arrives to photograph this experiment in cohabitation. The Alaskan government frowns on such experiments, fearing that it destroys the bear's fear of humans and encourages them to wander into towns in search of garbage. But the sight of Charlie and his faves romping in the sun is magical, I loved it (Monday March 15 at 8 p.m. on ANIMAL PLANET).
Then there's Bears: Spys In The Woods with the soothing narration of David Attenborough. This one utilizes "spy" cameras distributed through various woods to show the mmultiple aspects of bears in their habitats. It took 800 hours before the cameras finally picked up a giant panda bear in China showing how the animal would eat only bamboo shoots. Then there are cameras of brown bears gamboling in Alaska and the sow teaching her cubs to catch salmon. Filled with insights and delightful scenes (Friday March 19 at 8 p.m. on ANIMAL PLANET).
The best one I saw comes last ": The Bear Whisperer. This one salutes Steve Searles of Mammoth Lake in northern California. He used to shoot bears but now tries to save them. During summer months he'll answer 20 distress calls a week from home owners concerned bears are getting to close to their children. He's so good at his job the town now has him working for the police force.
We see his methods --he recognizes every bear and is patient with young ones who have simply wandered off trail and want to get away in one piece. Others get threatening shots of buckshot but none has ever been put down, a sharp contrast to the way other towns treat wandering bears. This one runs two hours and is packed with exciting adventures (Saturday March 20 at 8 p.m. on ANIMAL PLANET).
Posted by james bawden at 3:03 AM